Tomorrow, Friday 25th, we're driving down to Cornwall for a week, to recharge our batteries. I'm hoping to get some writing done somewhere along the way, so the laptop will be coming too. If I can get access to the internet, I might even post now and then. 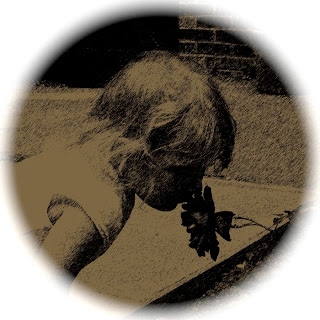 Anyhow, I'll leave you with this wonderful quote from Speckly-Woo! As we were returning home from a walk to our village shop, yesterday, she noticed the long grasses growing on some nearby common-land. She paused for a moment, and then declared, "I like tall grass, but not deep water."

Oh for the mind of a child.

I have to thank Kat Mortensen for inviting me back to the 80s.

For me, like many of my generation living in the UK at the time, that decade will always be defined by the huge social and economic upheaval that came about, courtesy of the Thatcher government. I was one of the 4 million unemployed, an experience that continues to shape my thinking today. 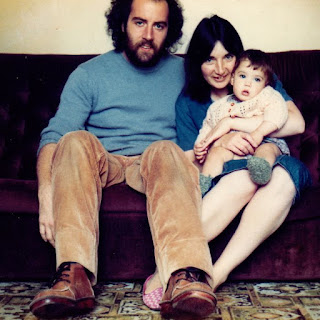 On 17th January, 1981, this young family took a leap into the unknown and moved a couple of hundred miles to the west of everything they were familiar with. 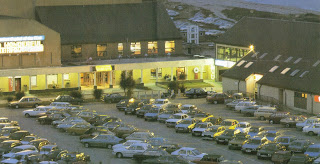 We didn't have any connection with Cornwall, yet we were convinced it was the perfect place to build a life and raise a child. After three months of trailing around, looking for work, I landed a job in an entertainment complex, where I would keep the bars stocked with booze. That was the first of many turning points for us. I recall, we had just enough money for the fare to get me to the interview. It was a long walk back.

So, it's that summer of 1981 that I'm writing about here. A long, hot, busy season by the sea, earning a little over £1 an hour. With chart-topping bands playing most nights at the Cornwall Coliseum, I didn't finish my shifts until the small hours. You can do the arithmetic. Fourteen hours earned me something in the region of £15.

There are lots of stories to tell, though not all suitable for this blog as, inevitably, some of the rock 'n' roll left its mark. For instance, a colleague had his car dumped into the olympic size swimming pool by an over exuberant Rainbow road crew. Another time, I was roped in, along with every other able bodied male, one exceptionally humid evening, to carry out Adam Ant fans who had collapsed in the stifling heat. I'm only sorry I don't have a picture of the line of semi-conscious partygoers laid outside in the fading light, with only a heavy drizzle to bring them round.

It fell to me to put up the drinks orders for the likes of The Tubes, Dr Hook, The Jam, UB40, Ultravox and countless others. Great blue bins of alcohol were delivered to the dressing rooms. Even now, I find it hard to see how so much could be consumed by the average band, but consume it they did.

It wasn't all sex, drugs and rock 'n' roll though. Arguably, one of the real highlights was running into town for a jar of honey and some fresh lemons. Why? Well, to ease the sore throat of one Ray Davies, of course! The Kinks' legend was suffering, and I was despatched to pick up the remedy. I actually handed the goods over to him myself. Then, in a somewhat surreal postscript, I found myself standing on the same stage, during a soundcheck, watching him singing Waterloo Sunset.

The job lasted for 18 months before redundancy struck. There followed almost four years of more lows than highs, but I eventually got a break with my writing. Another major turning point.

Perhaps more posts from this era sometime. For now, I have to thank Kat for the idea of harking back 30 years or so.

This picture of my maternal grandparents, Asher and Hilda Gregory, encapsulates the spirit of my early childhood. Have we got rope and a piece of board? Great, let's build a swing! 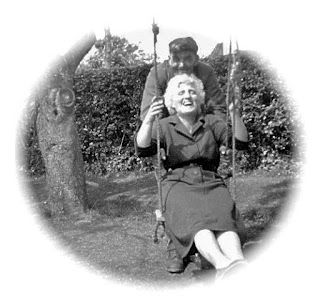 And my grandfather's inventiveness didn't stop at swings. He once ran a length of cable between two apple trees and spent all day improvising a 'commando-style' pulley wheel, with hand-grips for me to hang on to. Halfway through my dangling, swaying, death-defying, trial run, it dawned on him that I wouldn't be able to stop before I reached the tree at the end. I heard him tell me to jump, which I did, landing unceremoniously in a series of forward rolls and uncontrollable laughter.
He was a big fan of 'French' cricket and badminton. We played croquet (home- made mallets and hoops, and recycled cricket balls) and even ventured into the surreal world of 'clock' golf.
Whenever there was a new craze, he would replicate it in his own inimitable style. But some fun things were the products of his own childlike imagination. I remember how he fashioned celluloid flying saucers and launched them with huge rubber bands cut from old inner tubes of worn out tyres. Given the strength needed, I think this was one for him, rather than me. There was a see-saw/roundabout combination that involved the use of a long plank and an oil drum, a tree house and a wooden box on a set of old pram wheels.
As I relate these things to you, I'm thinking it's probably luck that I'm here to tell the tale.
This is a Sepia Saturday post.