Sepia Saturday: Path to the Past 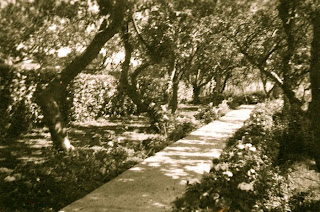 This week, my Sepia Saturday offering might seem a little out of the ordinary. Not a person in sight. No visible family member, no ancestor posing for the camera. Just a snap of a garden path, lined with trees. And not a particularly good snap, either.


I have other photographs of this scene, sharper, in colour and taken at a time when the flower borders were better developed, more vibrant. However, this little snap takes me where no others can.


The hedge to the left is laurel. My maternal grandparent's house was called
'The Laurels'.


I can't look at this path without the memories coming back. I remember when it was laid, in concrete, from the conservatory door to the well. In fact, you can just make out the housing for the water pump, at the far end of the path.


I see my grandmother walking along its length, with a waddle caused by her arthritic hip. I can feel the newness of the surface under the soles of my child-sized shoes.


There was an incident that occurred on that strip of grass, between the apple trees and the laurel hedge, on the left. As a small boy, I trod on a garden rake that I hadn't noticed. The handle came up and struck me, soundly, on the forehead, and I let forth with all the mysterious words I knew adults used in moments of crisis or shock. It was my secret, or so I thought. Only years later, did my grandmother's elderly neighbour, Mrs Cooper, confess that she'd heard my outburst, as she had been working in her garden on the other side of the hedge. She had wanted to ask me if I was alright but, was so doubled up with stifled laughter, it was impossible to call to me.


My grandfather was proud of his old apple trees. Beauty of Bath and Worcester Pearmains to the left. Russets (his particular favourite - and mine) to the right. He learned how to graft, and eventually had a number of trees bearing two or three different types of apple.


There were other paths. They skirted around the greenhouse, the potting shed, the orchards and various plots and, they, like the lawns, were all neatly mown.


How many times did I walk this path? Called for tea by the warmth of the fire. Plodding along after feeding the chickens. Casually strolling with an apple in hand.


Yes, a simple and, on the face of it, a fairly nondescript snap. But, when allowed to tell a story, it becomes a treasured slice of my life.

Clickety-Clack, Takes Me Back.


Here's a little tale that some of you will relate to, I'm sure.


About ten years ago, I travelled, with a colleague, to attend an event at the British Newspaper Library in Colindale, North London. We arrived at Waterloo and had a bite to eat before boarding the tube train which would take us along the Edgware branch of the Northern Line. 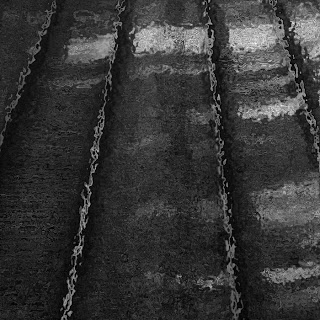 Now, you know how it is with any train journey. When conversation dries up, the clickety-clack of the wheels on the track can be quite hypnotic. I remember casually gazing at the passing scenery as we made our way on the overground section of the line. Viewing the backs of houses from a seat on a slow moving train has always intrigued me. So much to see, especially at dusk, when families are settling in for the evening. In a moment, it's possible to make out a father padding around the dining room, children agog at the TV, someone answering the telephone or merely reading the newspaper.

So, here I was, mid-afternoon, on a winter's day, enjoying the snapshots of people going about their everyday lives. But, at some point between Golders Green and Brent Cross, something strange began to happen. The passing view was becoming more and more familiar. At first, I resigned myself to the fact that, after a while, the houses were bound look the same, so there would be a degree of predictability. Yet, with each clickety-clack, I could envisage exactly what I would see, before it came into sight. In short, I knew this place like the back of my hand, even though this was absolutely the first time I had ever been here. It was all beginning to get a bit disconcerting, when my colleague tapped me on the knee and asked me if I was okay.

"I know you'll think this sounds barmy," I said, "but I know this place. I've never been here before but, for a while back there, the houses, the skyline, it was all so familiar."

My colleague looked through the window for a moment, as though he was trying to gather evidence to support my claim. Finally, he shrugged his shoulders. "Déjà vu," he said.

Although Déjà vu continues to baffle those studying the phenomenon at a scientific level, there are some claims that it can be induced under hypnosis. Which leaves me wondering if, somehow, the clickety-clack had momentarily taken me a little off route.

Email ThisBlogThis!Share to TwitterShare to FacebookShare to Pinterest
Labels: Spooky


Back in April of this year, I posted about Mag's great aunt Jessica, born 1896. Not an awful lot is known about her, other than the fact that, at some stage, she moved from Southampton to Ilford, in Essex. She had two children, Eric and Joan, and Mag's late mother, May, took holidays with them during the years before she was married.


In the few photographs we have of her, Jessica dresses in a  stylish manner and has the appearance of someone in a position of responsibility or authority. 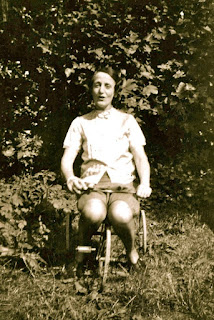 Then I discovered this fabulous snap of her, and it's oozing humour. Not just the image of the grown woman, still wearing her (office attire?), sitting astride a child's tricycle. But look at the expression on her face, and the shape of her mouth. She may have been caught in the middle of a song or, perhaps, a little mock protest at being photographed in such a bizarre pose.


The leaves and the grasses, in what I can only imagine as being the wild end of a garden, suggest summer. Jessica's short-sleeved blouse is a giveaway too.


So, who took the photograph? Were there children present? This is the kind of nonsense I might get up to, if I was looking to make the grandchildren laugh. Maybe it was an impromptu act, having just discovered the tricycle in the undergrowth.


If she was singing a little ditty, I wonder what it was?


I was trying to remember if, as a child, I'd ever had an imaginary friend. After some effort I could vaguely recall talking to myself sometimes but that was just me having a one-way conversation. I don't think I ever actually conjured up a little pal who was exclusively visible and accessible to me. Someone I could consult and play games with. 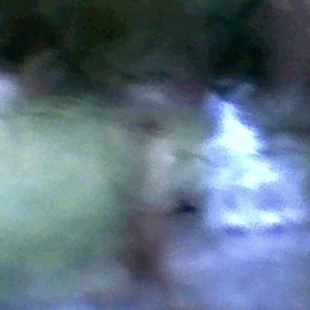 
As I watch our three granddaughters growing up, I'm intrigued to see if any of them show signs of having imaginary friends. But, as yet, Speckly Woo! continues to have inventive conversations with her long suffering rag doll, Mary, and the 16 month old twins haven't developed a recognisable vocabulary. Most of the time, they burble away in their own little world. Some might say, like grandfather, like granddaughters.


The point is, 'their own little world' is a place we have no way of entering. We can only guess at what goes on there. For example, there are those eerie moments when a toddler's full attention is drawn to a point somewhere in middle distance. Question marks start to appear over your head.  Even more inexplicable, the little darlings begin to smile at their new object of interest.


I have read theories that small children may use levels of consciousness that recede or get overtaken as they pass the two year mark. As always, there's a danger that we adults may place a heavily speculative label on that which we don't fully understand. When our daughter was about two and a half, we told her about our wedding. She listened intently before declaring, "I was there. They carried me in on a pink cushion." It's reasonable to expect that my instant reaction would be to try and work out what had given her that idea. On the contrary, I was more intrigued to know who 'they' were.