When I began to write this post, about my maternal grandfather's cousin, George, I thought it would probably run to little more than a few lines. Along with the postcard, this would make a perfectly acceptable contribution to Sepia Saturday. As it turned out, I've been digging through my family history files, raiding google for street views and trying to remember when I last saw cousin George. 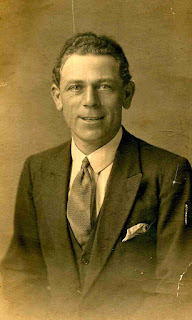 A postcard of Edward George Gregory
The last part proved to be relatively straight forward. It would have been at least 35 years ago. I remember we were visiting my grandparents on a Sunday afternoon, when this slightly built, elderly gentleman came strolling through the gate. Born in 1900, George would have been in his mid 70s (my arithmetic is atrocious). On that day, he had taken the ferry from the Isle of Wight, caught a bus from Southampton and walked the last half a mile from the bus stop. A bit adventurous for a man, well into his retirement, just to visit family, on spec. But I have learnt that adventure was probably in his blood.

His father, Robert Frank Gregory, was born in Dewlish, Dorset, in 1867. Robert's early life would have been centred around his father's agricultural duties as a Dairyman. The family lived in a small hamlet, in the most rural of locations. However, Robert had an itch he needed to scratch, and by 1891, he had gone to London in search of some excitement. In fact, he and another chap, John Holmes, just four years his senior, were lodging together in Burchell Road, Peckham, both working as Tram Drivers. This wasn't the only thing they had in common. They were also from the same hamlet in Dorset. Somehow, it isn't difficult to imagine two young men, showing an urge to move off the land and, perhaps, encouraged by the signs of increasing mechanisation on farms, determined to capitalise on a new age. 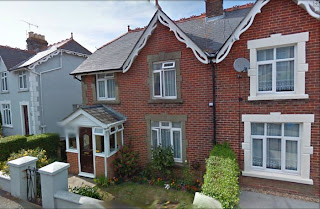 Half the fun of family history research, is tying up loose ends, following clues and making educated guesses. For instance, my grandfather vaguely remembered his Uncle Robert had some connection with buses or coaches. Try trams, for good measure. Maybe that's what he was doing in Somerset, during the lost decade or so. 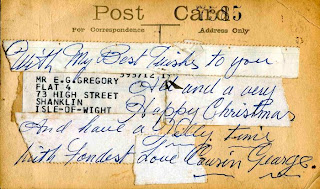 The oddly, patched, reverse side of the postcard, with Christmas message
However, some things will remain a mystery. The patchwork of paper scraps on the reverse side of George's postcard takes some working out. I can only imagine that he sent this to my grandfather in an envelope (as there is no stamp), one Christmas. 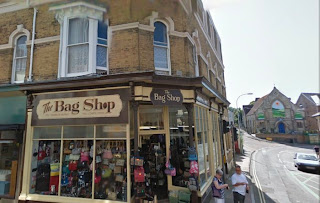 73, High Street, Shanklin - courtesy of Google
One thing is for certain. The flat he occupied at the time of sending the postcard was unlikely to have had The Bag Shop below. I am wondering if this could possibly have been a butcher's shop, then. In which case, I'll probably be left with more scrag ends than loose ends.

One of the joys of blogging is, undoubtedly, the community spirit it generates. Add to that, personal development, shared creativity and serendipity, and you have a recipe for something we have all come to appreciate as being very special.

From time to time, I'll get an email out of the blue - assuming cyberspace is blue - from a complete stranger. It's usually someone responding to my open invitation to get in touch personally, rather than leave a comment, publicly. But yesterday, I was contacted, after a Google search, by Stephanie Rich. In her message she says, "Square Sunshine is a wonderful site - I came upon it by googling best grandparent sites and finding a list of them actually. Then kind of handpicked the ones I thought were interesting!" Flattery will get you everywhere, I thought. Then, Stephanie went on to tell me about a book she has written, and I have to say, I was hooked from the moment she mentioned her Grandfather. This is how she describes her wonderful project. 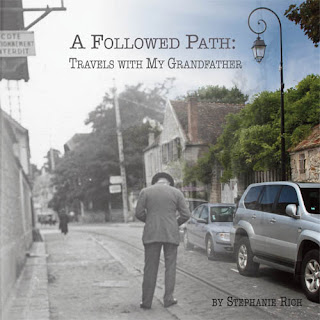 A Followed Path: Travels with My Grandfather, documents the summer of 2009, when Stephanie re-traced a European trip that her grandfather, Leo H. Rich (a New York native) took back in 1931. Stephanie carefully recreated more than 150 of Leo’s photographs and her results are showcased next to his original pictures throughout the book.


A Followed Path showcases the original and retaken photos side by side. It focuses on their photography, but also details what it was like for a young woman to travel through the eyes of a grandfather she never had the chance to meet. Leo's world came alive to his granddaughter as she traveled in his footsteps throughout Europe. Alongside more than 350 full colour photographs are the stories of the challenges, people and adventures Stephanie encountered while trying to find these often unlabelled locations. Through Leo's letters and photographs, and her own historical research, she describes what the Europe of Leo’s experience was like and how it has changed in 78 years.

Stephanie Rich was born in 1983, seventeen years after the death of her grandfather Leo. She grew up in Minneapolis and studied at the Medill School of Journalism at Northwestern University. After spending several years as a film sales agent in Los Angeles, Stephanie is now reading for her MBA at the University of Cambridge in England.
Posted by Poetry24 at 20:00 14 comments:

An Air Of Mystery

If I was asked to choose the single most fascinating thing about our identical twin granddaughters, I'd be scratching my head for a while. There are so many aspects of their character and behaviour to be fascinated with. 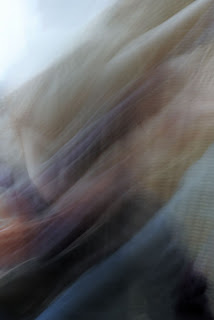 I took a series of photographs of the twins just recently. This one
was almost consigned to the waste bin. Then I had a thought.
Perhaps this is what mystery looks like, when it surrounds certain aspects of behaviour.

At 18 months old, they are into everything. They play together and they play independently, finding new and interesting applications for the contents of their toy box. They share their snacks and pass each other's drinks. They squabble over a single item yet, openly offer the spare, where there are two.

If one gets upset, the other cries too. When either of them lands with a bump, the other is there with a look of concern and a reassuring stroke of the hair.

Most curious of all is 'twin talk' or, cryptophasia. More often than not, they'll communicate with glances or hand gestures. At odd times, you can feel like an outsider, as they actually talk to each other in their own language. It is totally exclusive and, although it sounds a bit like gobbledegook, it's mutually understood by them.

I've heard all kinds of stories about identical twins. Among the most interesting was one told to me by a friend and former colleague. When she was at university, one of her lecturers was an identical twin. He had a very bad stammer, which was sometimes hard to control. His twin brother was also a lecturer in another university. During the time my friend was being taught by the brother with the stammer, his twin died. Almost simultaneously, her lecturer lost the stammer he'd had since childhood. A mystery, don't you think?
Posted by Poetry24 at 22:05 10 comments:

The kitchen is usually the hub of any household. This one, tiny and haphazard, with my grandmother at the helm, was no exception. It was the heart of her home for many reasons. Here was a place where she concocted experimental health food recipes, boiled up potato peel for her chickens, made jams and bottled fruit. It's where the division of labour involved my grandfather lighting the range and making the tea. Aside from these duties, it was a room he drifted through, en route to where they both sat to eat, watch television and play Scrabble.

At night, two sets of dentures resided in a bowl of water, frothed with Steradent tablets. 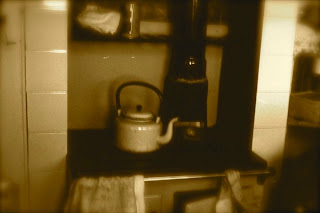 Lighting the range at around 05.00 was a ritual. As the bright burning wood generated enough heat to cook, an ancient electric kettle was used to make tea. A cupful was conveyed upstairs to the bedroom, and grandmother sipped it while porridge was stirred to the correct consistency.

Hot, kettled water was used for washing in the kitchen sink, before the addition of a proper bathroom.

The air was always heavy with the aroma of woodsmoke, Fairy household soap and baking.

On wet days, I'd play word games with my grandmother or, spend time investigating the inner workings of an old clock. I might even make iron filings dance on newspaper, by running a small magnet underneath.

I recall, one frosty morning when my great uncle dropped in. He sat himself on the kitchen chair, removed his boots and proceeded to warm his feet in front of the open oven door!

Phyll, the woman who delivered the daily papers - more about her in a future post - tied my school tie here, once. She'd claimed to be an expert and grandmother was getting more exasperated with her own failed efforts. Some expert! Phyll tied my tie in a bundle of knots that took almost the entire length of my school bus journey to unravel.

Whenever I look at this slightly out-of-focus photograph, so many memories come flooding back. Tucking into baked rashers, cabbage and potatoes, followed by a hot milk pudding. Steaming cups of cocoa just before bedtime. A friendly face and a warm welcome on every visit, regardless.

Most poignant of all, the day we called to discover grandmother on the floor, following a tumble. Grandfather - nearly 90 at the time - too frail to help her to her feet. Not much damage done on that occasion but, a significant turning point in the lives of this fiercely independent couple.

I must have taken this photograph in the mid-seventies yet, that kettle still looks as though it might be ready and willing to make us all a cuppa.

Days become shorter, the air takes on a chill and the clinging damp of Autumn rises up from the fallen leaves and lingers in the hedgerows. The wind sprints past, without apology, like a late errand boy with a message for the receding Summer. 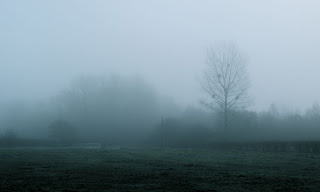 These are the days of afternoon walks, lit with a weakening sun. A time for home comforts. Warm familiarity as you cross the threshold. Soft lamps and the light rasp of drawn curtains. Maybe, toast for tea, or one of my favourites, a baked apple with sultanas, brown sugar and cinnamon oozing and bubbling from the hollowed core.

Before tuning-in to the chaos of the wider world, you might pull a book from the shelf. A best-loved title from childhood? You open at the first page, read a few lines, the fragrance of evening still filling your senses.* 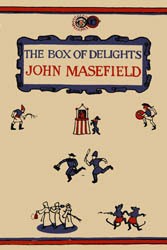 In no time at all, you're drawn in, the story developing around you. For me, this might mean that I'd drifted into the company of Kay Harker.

Spangled puddles rest, undisturbed, in the quiet of the night. Not a ripple, after footpaths have shrugged off the last lonely footsteps.

Upon waking, the season hangs around the houses, in paralysed veils.

* Our Speckly Woo is not quite four. During a recent overnight stay with us, I introduced her to the BBC version of 'The Box of Delights'. She's a year younger than her mother was, when she was mesmerised back in 1984. Speckly Woo let her taste buds influence her reactions to the story. There came a stream of questions relating to "the box of angel delights", most of which centred on "King Horlicks", rather than Cole Hawlins. Magical!
Posted by Poetry24 at 17:35 16 comments: