Until quite recently, these items, once belonging to my maternal grandfather, took pride of place on my bedside cabinet. He died in 2002 but, such was the impact he had on my life, it was a while until I felt ready to place these things safely away, among my other treasured possessions. 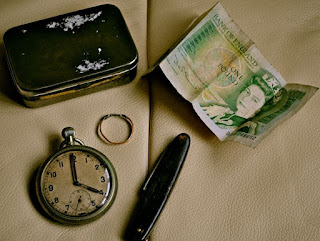 My grandfather was a man who lived a simple life. A countryman, a craftsman, a softly spoken, placid man, who was always there. He offered a strong male presence, influence, and unconditional love.

Once, he said of money, 'there's no taste to nothing, but you only need enough." He maintained to the last, "clothes don't make the man." And, while I had my head in an academic cloud, he quietly urged me not to overdo it.

He had simple tastes, yet he could appreciate those things of wonder that existed outside his sphere.

Fortunately for me, I have these items as a permanent reminder of the man. A small lozenge tin, polished back to the bare metal by the lining of his jacket pocket and his regular handling. He kept his pocket watch in the tin, to protect it while he was working in the woods. As a small boy, I was fascinated by the soft, whispering ticking of this well used timepiece.

Also in the tin, a neatly folded one pound note, for emergencies (a half an ounce of Old Holborn hand-rolling tobacco).

Aside from those things I've already mentioned, I have his pen-knife, with blades worn down with years of sharpening (he couldn't bear to have cutting tools with no edge to them). Most poignant of all, there's my grandmother's wedding ring. Worn to wire thickness through the best part 69 years, it eventually snapped. Typically, the man who had placed the ring on the young hand of the girl he loved, in 1933, wanted to mend it, himself. A crude attempt, maybe. But in his mind, the right thing to do. A seemingly, simple solution.

Regular readers of this blog will have worked out that, more often than not, the related dreams of a child are far more intriguing than anything that might spring from my creaking imagination. 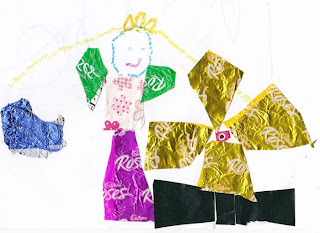 First, give a child a pair of safe scissors, some glue, a box of assorted sweet wrappers, and some creased remnants of foil. Look on, with ears pinned back, and enjoy.

Before embarking on her little creative flight of fancy, Speckly Woo and I had a conversation about dreams.

"What did you dream about, last night, Grandad?"

I'm rescued by her impatience. She's desperate to tell me all about her own dream.

"I dreamt about a fairy in a garden. She had yellow hair, and she was trying to catch a blue butterfly. And there was a big flower in the garden."

"That sounds like a lovely dream, what colour was the flower?"

"It had gold petals and a pink middle. You'll see it in a minute, when I've cut it out and glued it."

So, I sat back and watched her fairy emerge, next to a huge golden flower with a pink centre, and dark green leaves.

Fluttering, just out of the fairy's reach, was a blue butterfly. And although you may be thinking it looks a little like a pair of blue underpants that have blown off the clothes line, I assure it most definitely is a blue butterfly. Speckly Woo told me so.
Posted by Poetry24 at 19:43 13 comments: 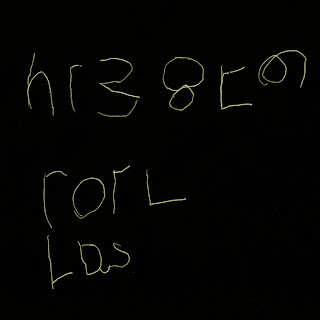 This evening, I was handed this message by Speckly Woo. I inverted the colours during my failed attempts at decoding.

She insisted that I should keep it about my person, presumably to prevent it from falling into the wrong hands.

Now, it could be highly classified…or it might just be an early order for a breakfast of boiled egg and toast soldiers (she's staying over tonight). What do you think?
Posted by Poetry24 at 22:14 13 comments: