There are many good reasons
for heading upwards. 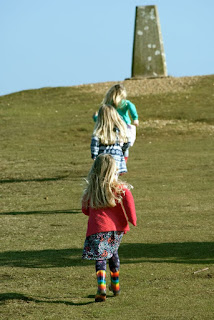 The views, for starters. 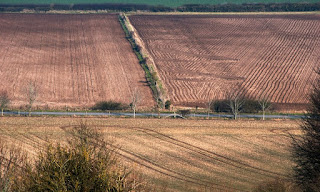 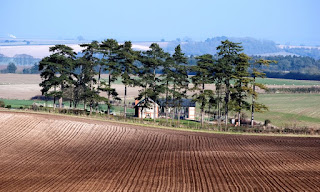 Extra Helpings of Roobarb and Custard

Two greats have moved on in recent days. Bob Godfrey, and Richard Briers. The two men shared a connection through Roobarb and Custard, a favourite with our daughter when she was younger. A favourite of mine, as I get older.

For the best part of four years, I’ve been sharing my thoughts and observations on this blog. Just another grandparent offering personal perspectives, on one social media platform or other. 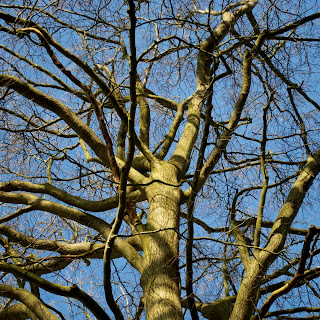 As I revisit some of the 750+ entries I’ve written, I wonder how much of an impression these digitised musings might offer to generations beyond our grandchildren, should they be remotely interested. Will anything I write, help them to form an impression of who the old chap was? They won’t have heard my voice, won’t have ridden on my shoulders or noticed how my expression changes when I’m listening to music or viewing works of art. They will have photographs, but more of those taken by me, than of me.

They might hear tales or episodes of my life, and they may even get to have and hold some little ‘something’ on the end of a time-stretched thread.

This may all sound a bit strange and, if it does, put it down to a combination of a short Philosophy course (yes, I couldn’t resist it in the end) and this thought-provoking article by Rebecca Ley.

I admire the way our daughter and son-in-law have devised and stuck to a regular bedtime routine for their children. Every evening at 7 o’clock, it’s bathtime, storytime and bedtime, in that order. Little resistance, few complaints and a guaranteed opportunity for mum and dad to exhale, “phew!” in unison, before savouring some peace and quiet.

Our way was quite different. Blessed with a daughter who resisted sleep with dogged determination, we went for an ill-fated ‘fall asleep when you’re ready’ option. To cut a very long story short, acceptable sleeping patterns only resumed after a deal was struck. Our infant insomniac having developed a capacity for bargaining that any trade union hard-liner would be proud of, at last agreed to make her own way to the Land of Nod without mummy holding her hand. The price? A guinea pig. I wouldn’t recommend bribery, but on this occasion it worked out for all parties.

There has long been a debate over appropriate bedtimes for children, and it seems that it’s still going strong.

I don’t remember there being too much discussion when I was a child. Although, I recall a time when there had been a little parental discord in the house. My step-father came bursting into the living room, switched off the TV and commanded everyone to go to bed early. And I mean everyone, himself included. It was one of those moments that are precious in your early years, when you just know that the adult has got it completely wrong, but nothing is going to reverse the decision. "Bedtime? What, all of us? Oh, okay then."

I'm reminded of Adrian Mitchell's  wonderful counter to Larkin's poem, 'This Be The Verse'.

Say what you will
School dinners make you ill
Robin Hood died from shepherd’s pie
All school din-dins
Come from dustbins
Out of town.

…or something like that. It’s been a long time since I sat down for school meals.

People of my generation will have you believe they were scarred by their dining hall experiences, but it wasn’t all ‘cannonball’ peas, solidified gravy, and insipid potatoes. There was a passable toad-in-the-hole, the occasion roast which included clearly identifiable meat. And of course, the puddings. Who could forget the chocolate sponge with chocolate sauce? Indeed, it's harder to let the hideously pink trifle slip from my mind, than it was to lift it from the dish. Still, I confess to a time when my eyes were bigger than my belly and, unable to finish the hard-won ‘seconds’, I was instructed to stand on my chair for all to ogle. Our head teacher, a fearsome Welshman, brought everyone’s attention to bear upon the “grreeedy boy!” with a diction sharp enough to pierce custard skin.

What tales will the pupils of the Swell Primary School in Stow-on-the-Wold tell their children and grandchildren, about school meals? Currently, all 40 of them walk to their local pub, The Golden Ball Inn, for a cooked meal, once a week. It’s a great solution to the problem of offering a hot meal, prepared off-site. And I’m certain that it’s an initiative that wins the approval of my blogpal, Alan Burnett. What do you say, Alan?

What Price Fluffytails and Superheroes?

If there’s one thing parents dread, it’s the moment when their children have to negotiate busy roads without an adult hand to hold. No matter how much sense you hope you’ve imparted, the nagging doubts remain. Did you place enough emphasis on vehicle speed? Have they fully understood the ‘look right, look left, look right, again’ routine?

It’s precisely because parental road safety advice/instruction can break-up under the weight of ‘tidy your toys away’, ‘have you brushed your teeth?’, ‘do your shoes up properly’, etc, that government information adverts have proved so successful over the years. If you want to grab a child’s attention over something that’s potentially life-threatening, convey your message via an animated squirrel. Alternatively, use a superhero with a physique that suspiciously matches that of Darth Vader. We all remember the ‘Green Cross Code’ don’t we?

So how bonkers is it that the Department of Transport has decided to ‘pull’ televised road safety adverts in order to "re-prioritise" its budget? Apparently, “the department's Think! campaign has a budget of £3.6m, with £78,000 of that spent on educating children about road safety.” I imagine it will take the formation of a new committee to re-prioritise such a huge sum.

Following the positive identification of Richard III, from bones discovered under a Leicester car park, I asked SW if she’d seen the facial reconstruction of the long lost king. She hadn’t, so I whisked her away to the computer and found the appropriate page on the BBC website.

SW was fascinated by the reconstruction, but her attention was drawn, again and again, to the skull. Well, I suppose we see people’s faces on a daily basis, and it’s easily understandable why the hinging of a lower mandible and the hollow places that accommodated the royal eyes and nose, were worth a second and third look.

Particularly intrigued by the teeth – SW has been busily growing her second set, these past months – it was noticeable how impressed she was by the majestic molars and imperial incisors. I suspect that a drawing may be imminent. 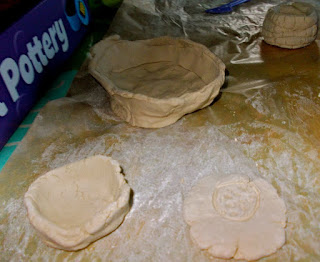 There's something special about handling clay. It's a considerable step up from Play-Doh and the finished article, once air-dried, can be painted, and placed somewhere for all to admire. The incipient pottery in the picture has been shaped by SW, and made with materials from a kit we bought her for Christmas Father Christmas delivered. It's uncertain whether the smaller vessel will hold a little sherry for the big man, when he arrives on the next 25th December, but the dish could easily accommodate a mince pie or two.

It’s not unusual for prospective parents to spend countless hours agonising over the best name for baby. Unless you decide to stick a pin in the short-list, or let tradition dictate a ‘family’ name, you’re final decision may be influenced by any number of factors. Maybe it’s got be trendy, and when I say ‘trendy’, I probably mean traditional. Tom, Jack and Harry seem to have gained considerable ground on some of the more outlandish choices, Finbar, Tarquin, etc.

Some of us have ended up labelled after a relative stranger. In my case, I believe it was the vicar who baptised me. Others may be named on a whim, what might be termed, a sudden rush of brood to the head.

There’s no doubt about the celebrity effect, either. Kids called after football teams, pop stars and the like. Or even those poor little mites whose names carry the heavy weight of expectation. We named you well and, with that you will surely live up to it.

But for me, I’d like to give three cheers for Blaer. Never heard of her? Well, Blaer, which means ‘light breeze’, is an Icelandic girl that has just had her name recognised and approved by the authorities in her home country. Apparently, Blaer is considered a boy’s name and is not acceptable for a female. Hmm, I can imagine being called ‘hot air’, but ‘light breeze’, no. Too girly.