"They called him "a country boy" at school despite his white face and slight, nervous appearance. The Fulham kids named him so because his speech gave him away. Swede and turnip speech. But, the newcomer found it impossible to explain, he came from a hilly, green and lovely certainly, yet coal-mining part of England, on the border of Wales. The Forest, the land on its own. Not just the country." - Dennis Potter. 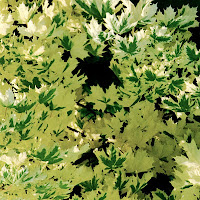 There’s no clean way to uproot a young boy from the countryside, and transplant him in an urban environment. Oh he’ll survive, but only because nature has a way of forcing adaptation. And the chemical changes, the cooler climate, unexpected levels of acidity, all play their part in temporarily stunting his growth. It may be several seasons before he shows any significant signs of blooming.

Contending with his new growing ground is one thing, but having the colour of his expression repeatedly trampled on is quite another.

In the nurturing confines of his classroom, this country boy was tended by a tired individual. Her once green fingers now glowed pink from all the poking and prodding of sub-standard specimens. She was enduring her own private drought. Stale, and wrapped in tweed, she sought to stimulate the country boy with liberal doses of ridicule. Her potted prize-winners spread out from where his feet were forced to the seat of a chair. The uniformity and cultivation of those about him, sealed his fate.

Like Potter, I found it impossible to explain, I came from a green, wooded, wonderful part of England. A place that was the land on its own. Not just the country.
Posted by Poetry24 at 11:25 8 comments: 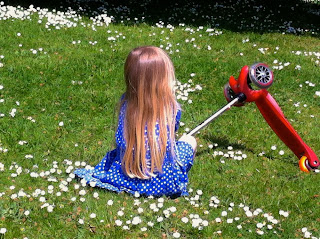 Yesterday's fashion critic turns her attention to micro-scooters.
Posted by Poetry24 at 22:06 10 comments:

Email ThisBlogThis!Share to TwitterShare to FacebookShare to Pinterest
Labels: Granddaughters

Our daughter bought a new dress a couple of days ago. In the shop, she seemed delighted with her choice. But after trying it on at home, she wasn't so sure. Yesterday, she announced that she would be returning the dress later in the week.

We were enjoying lunch in the sunshine when she revealed her decision. The twins ('Thing 1' and 'Thing 2') were listening intently.

Mummy: I'm taking that dress back to the shop on Thursday.

Mummy: I don't know, after I tried it on at home, it just didn't look right. I mean, it's a pretty design and it's the ideal length, but it makes me look...hmm, sort of, well...

Email ThisBlogThis!Share to TwitterShare to FacebookShare to Pinterest
Labels: Granddaughters

When SW returned from a recent family mini-break by the seaside, she couldn't wait to show us what she'd collected from the beach. She carefully sorted and arranged her 'treasure', on her bedroom floor, and pointed out the perfection in each piece. 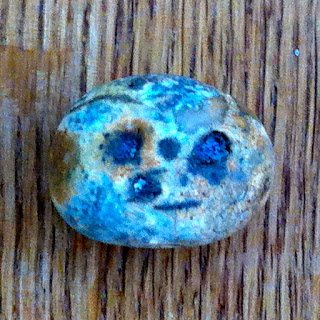 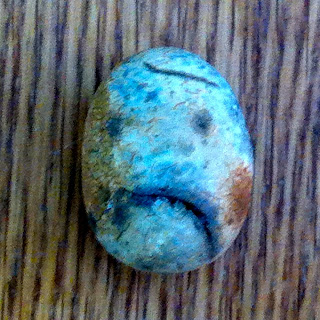 The prize exhibit wasn't a shell, but a small and unusual stone. Unusual because, as SW pointed out, it has a smiley face on it. She handed it to me so that I could inspect it more closely. I turned it this way and that, and to my surprise, on the obverse side was a face that told a different tale. "This side doesn't look so happy," I said. The reply was instantaneous, "No it doesn't, does it? But I can really only see the smiley face." With that, she turned the stone again. After all, why would anyone want a miserable pebble in their collection?