Designs on Saving the Planet

So proud of Primrose (aka SW). Along with the designs of four other competition winners from school, her artwork is prominently displayed on the cab of a brand new lorry; one of a fleet belonging to a recycling firm in Hampshire.


The message is loud and clear, "Recycle and Save the Planet!" 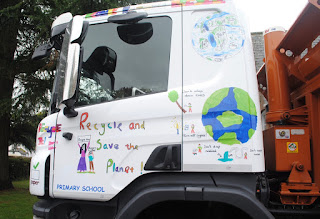 When the lorry turned up at the school, we were eager to see how the finished product looked. Then, one of the teachers spotted it and said, "Here it is, on this side. Those are definitely Primrose people." I have to agree, her figures are certainly distinctive. Those of you who visit regularly will already know this. 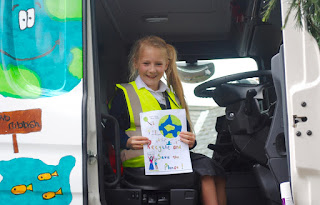 Of course, she couldn't pass up the opportunity to sit in the driver's seat, original design in hand.

I watched as he stacked the dried hedge trimmings. He moved gracefully from one small pile to another, stabbing the tangled mess with an old pitchfork before holding it high, like a sacrifice. With long strides he worked around the coarse-carpeted field, quietly. Even his heavy corduroy trousers chafed in a whisper. The hobnailed boots crushed debris into the soft earth, with no audible protest.

When he was out of sight, beyond the growing stack, I turned my attention to the sky, and the clouds that moved like migrating spirits, beyond the limits of the freshly trimmed horizon. It was as though they were compelled to escape from where nature had been cut back. I imagined their great shifting bodies of cumulus seeking to mirror a wilder terrain.

He returns and pushes the pitchfork hard into the ground. “Better light up,” he says. I’m excited because I know there’s going to be a blaze.

“Fetch up some little bits and pieces like this.” He holds his huge, calloused hand in front of me, a small replica stack of dry grass and tiny twigs sitting steadily in his palm.

I scouted around, eager to please. “This enough?”

“Lay it in that space I’ve left at the bottom of the stack.”

I did as instructed, and waited.

He took a cigarette paper from his waistcoat pocket, and crumpled it gently before placing it in the tinder I’d collected. Then, out came his lighter. He clutched it tightly and held my gaze for a moment or two, before handing it down, saying, “Remember, fire is a good servant, but a bad master.”

The lighter felt huge in my hand. I was suddenly conscious of being given enormous power, the power to make fire.

With the first snap, the wheel showered sparks onto the soaked wick. A weak flame wobbled behind the shield of my hand, as I moved it to ignite the small ball of paper. Signs of smoke bled from the stack, and I could see a long, searching tongue of flame reaching to consume its desiccated fare.

Eventually, the stack ate itself and shrunk into a grey disc of ash and defiant embers. The heat subsided and the cool of the late afternoon gained the upper hand in a soothing way.

I looked up, the clouds were long gone. Barely visible wisps of smoke sailed past my face and stung my eyes. He was putting his tools away and drawing a thick canvas sheet over them. Those stiff folds would be my seat for the short journey home. I was ready for my tea. I had made fire.

I was inspired to write this post after reading this piece by Kate Blinco in The Guardian, today.
Posted by Poetry24 at 16:07 8 comments:

Is he one of ours?

I don’t have any post-mortem photos in my family collection, but I do have a few that come close. 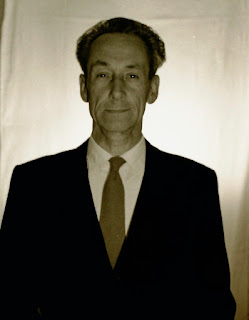 I have no idea who this character is, yet he has a place in the scheme of things, and a story that that was lost the moment he floated free from the memories of those who knew him. His sad anonymity leaves him stranded in a forgotten frame. He has travelled, through a lens and into limbo.

What can we judge from a face, or a pose? Well, the truth is, he can be whatever we want him to be. A kindly uncle, a scheming businessman, a sworn bachelor caught out in his Sunday suit.

How about the setting? Inside a marquee, a funeral parlour, at the site of a grizzly crime, perhaps? A police inspector frozen with a flash for the daily papers?

For me, the great fascination resides in the fact that he had a voice, a laugh. He would have shed tears, of joy and sorrow. He breathed the air, and in quiet moments, possibly before sleep, he would have been conscious of his heartbeat and all the realities that particular awareness brings. Later, he would have dreams, a flood of dramatic episodes and peaceful sensations that would help him imagine what might be, in his waking hours.

But today he can be regarded as dead. Dead, but for this photograph where he relives a brief moment, each time we look upon his image. A photograph that captured an expression, his dimensions and proportions, half a thought, the spark of an idea, a secret, the beginning of a smile, a single heartbeat.