Something sweet, simple and innocent. These things help to restore our spirits in such trying times. 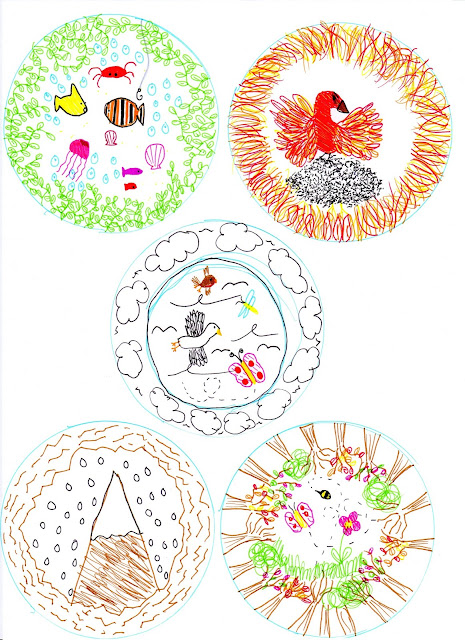 Water, fire, air, and earth. With harmonious nature added for good measure.
Courtesy of SW.
Posted by Poetry24 at 18:23 No comments:

The twins were deep into BBC’s ‘The Great British Sewing Bee’ when I asked if they’d mind pausing the programme for a moment as I had a serious question for them. There followed quizzical stares and semi-impatient fiddling with the remote. After all, what could be more serious than the trials of a man whose task it was to create a bra from scratch?

I hoped I wasn’t patronising them when I posed the choice of being in the EU or out of the EU. In spite of having worked with a European Documentation Centre in an academic setting, and having a strong enough grasp of European Humanities to earn me a 2.2 Hons, breaking the referendum down into understandable form, was not easy. In fact, I had rather been hoping someone would do the same for me, but that’s another story.

So I basically went with the, “going it alone” v “being a part of a bigger family” line. Imogen immediately opted for being independent from other rule-makers and having complete control. Iris thought about it a little longer, before offering this: “Well, I think we should join up with other countries. We should join Australia. Then we wouldn’t need to use a plane, or a train in a tunnel under the sea. We could just drive there.” And suddenly, it was all pins, tucks, and fragile fabric again.

As I posted earlier, on Facebook, I've decided how I'll vote in the referendum. After all that's been said and done, I've reached my own conclusions. It's hard to see beyond the negativity, the scaremongering, the self interests, and the pernicious points of persuasion that dance around the headlines of hate. But see beyond it we must. The only clear fact, either way, is that no one actually knows anything. Politicians have been spinning for so long now, they've lost sight of their principles. Like most people, they've got their fingers crossed. So it's down to us. Take your hopes and wishes to the polling booths on the 23rd, shape them into a X, and imagine you're sealing your dreams of a better future, with a kiss.
Posted by Poetry24 at 19:48 No comments:

When I asked my eldest granddaughter how she managed the barrage of tests recently undertaken at her primary school, she answered, "Oh, okay." But then she added, "Apart from spelling. I didn't do so well in that, I just know it. I failed that one." In these situations you always want to come up with one of those 'grandad knows best' or 'listen to your old grandpop' remedies, but kids are smart and they know when you're trying to smooth things over. So I settled for explaining that spelling and grammar will come. These things, I told her, you'll learn along the way. For the time being, try to put all notions of failure to one side. Of course she hadn't failed, and I'm pleased to say that her creative output is as full-on as ever.

Yesterday she was eager to show me her latest short story. 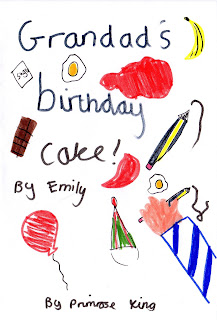 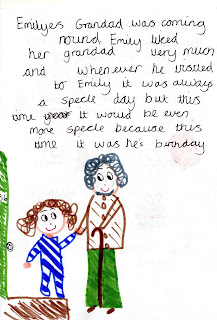 Emily's Grandad was coming round. Emily liked her Grandad very much, and whenever he visited Emily, it was always a special day. But this time it would be even more special because this time it was his birthday. 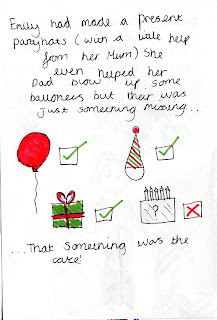 Emily made a present, and party hats (with the help of her Mum). She even helped her Dad blow up some balloons. But there was just something missing...that something was the cake! 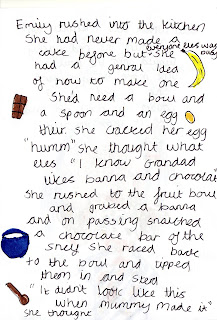 Emily rushed into the kitchen. She had never made a cake before, but everyone else was busy. She had a general idea of how to make one. She'd need a bowl and spoon and an egg. There, she cracked her egg. "Hmm," she thought, "what else? I know, Grandad likes banana and chocolate. She rushed to the fruit bowl and grabbed a banana, and on passing, she snatched a chocolate bar off the shelf. She raced back to the bowl and tipped them in, and stirred. "it didn't look like this when Mummy made it," she thought. 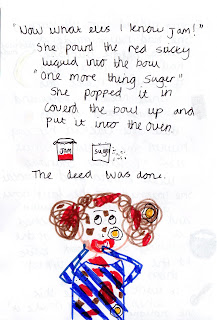 "Now what else? I know, jam!" She poured the red sticky liquid into the bowl. "One more thing. Sugar." She popped it in, covered the bowl up and put it into the oven. The deed was done. 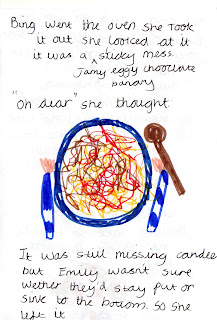 'Bing' wen the oven. She took it out. She looked at it. It was a jammy, eggy, chocolaty, banana, sticky mess. "Oh dear," she thought. It was still missing candles but Emily wasn't sure whether they'd stay put or sink to the bottom. So she left it. 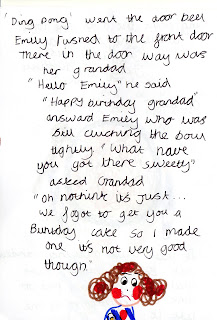 'Ding dong' went the doorbell. Emily rushed to the front door. There in the doorway was her Grandad. "Hello Emily," he said. "Happy Birthday, Grandad," answered Emily, who was still clutching the bowl, tightly. "What have you got there, Sweetie?" asked Grandad. "Oh nothing, it's just...we forgot to get you a birthday cake, so I made one. It's not very good, though," answered Emily. 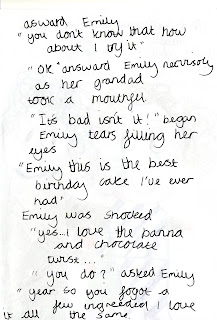 "You don't know that. How about I try it?" "Okay," answered Emily, nervously, as her Grandad took a mouthful. "It's bad, isn't it?" began Emily, tears filling her eyes. "Emily, this is the best birthday cake I've ever had." Emily was shocked. "Yes," continued her Grandad, "I love the banana and the chocolate twist. "You do?" asked Emily. "Yes. So you forgot a few ingredients. I love it all the same." 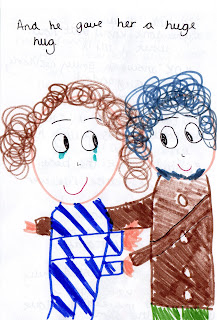 And he gave her a huge hug. 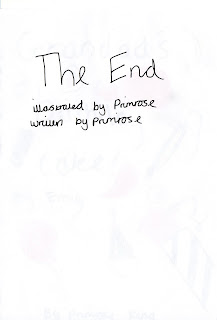