Are You Sitting Comfortably?

It probably won't come as too much of a surprise to hear that, since becoming a grandparent, my television viewing habits have changed markedly. For instance, CBeebies was a channel I used to skip past without a second glance. Now I appear to be more familiar with the schedule of offerings there than anywhere else!

We've lingered In the Night Garden and sampled other surreal fare, including Yoko! Jakamoko! Toto! Thankfully, before Mr Tumble succeeds in driving me to distraction, we're moving on to what I call 'proper' kid's programmes'. My current favourite is the comedy drama, Grandpa In My Pocket in which Grandpa is played by the incomparable James Bolam, an actor I can relate to. After all, I was his Terry Collier to my mate Andy's Bob Ferris in the days when we could so easily have been a southern reflection of The Likely Lads, although we would probably have been dubbed The Highly Improbable Lads.

A far cry from the days of Muffin the Mule and Picture Book, originally fronted by Annette Mills and Patricia Driscoll respectively. 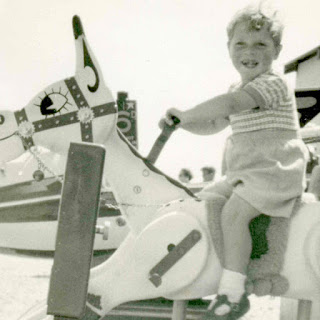 For those who don't believe in the power of television to influence young minds, the rather ecstatic youngster pictured aboard Muffin went on to be immortalised........in a portrait of sand!