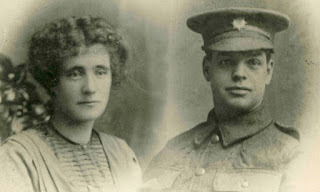 He volunteered in August 1914 and was immediately drafted to France, where he served on various sectors of the Front. He was present during heavy fighting on the Somme, when he sustained severe wounds, which necessitated the amputation of his right arm. He was invalided out in April 1917, and holds the 1914 Star, and the General Service and Victory Medals.
(National Roll Of The Great War)

As a small child, my mother-in-law, would cast her gaze back at the ghostly figure, gently waving to her from an upstairs window as she walked to Sunday School.

His mind and body damaged, Charles found employment in a brewery. There, he laboured, giving good service until, on 1st July 1926, death finally reached him from the fields of France and swept him away.