My wife Mags, and I, have been blessed with identical twin granddaughters, but my grandmother, Hilda May Butler, and her brother, Wellington Aubrey (always known as Jim), were fraternal twins. 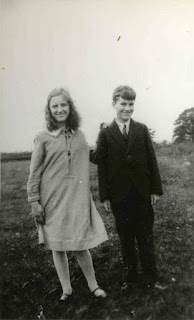 Here they are pictured in about 1926 in their early teens. Hilda was always keen to emphasise that she was the eldest…..by fifteen minutes! But with seniority, came responsibility. At school, Hilda was very protective of her brother, and that extended to taking the teaching staff to task. One day, when Jim was boxed about the ears by a teacher, Hilda flew for him and told him to leave her brother alone. She was called to the Headmaster’s room and asked to explain herself. The fact was, Jim had problems with his ears, and she feared that any blow might render him deaf. Hilda was excused punishment.

At some point during their childhood, they became separated temporarily. My great grandmother went to live on the Isle of Wight with Jim, and Hilda remained with her beloved granny, Jinny.

Throughout his adult life, Jim didn’t enjoy good health. But despite developing heart disease, he took up oil painting and dedicated most of his time to his passion, messing about on the river. He invested in his own boat and spent many happy years, cruising it up and down the Hamble River. 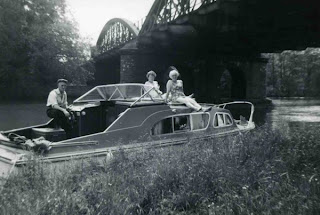 In the 60s, Jim and his wife, Terry, Hilda and my grandfather, took a river holiday on a cabin cruiser called 'Silver Sedge'. In this shot, Jim is at the helm and Hilda is far-right, doing a little sun-bathing.

Hilda also endured poor health in her lifetime. Anaemia in her early years, arthritis, hypertension and Polymyalgia rheumatica. This didn’t prevent her from working endless hours in her huge garden or taking a keen interest in diets and nutrition long before the big government-sponsored push towards ‘healthy eating’.

For years and years, Hilda, predicted that she would pass away aged 72. We used to tell her not to be so morbid, but she maintained a strong belief that her time would come at that age. Then, the oddest thing happened. It was Jim who died from a heart-attack……aged 72.

Hilda lived her life to the full until 2005. Then, tired and weary, she finally passed away aged 91.