This is Harry Baker, the elder brother of my great grandmother, Julia. Harry is a recent addition to the family tree and came to me, courtesy of another researcher of the Baker line of our family. 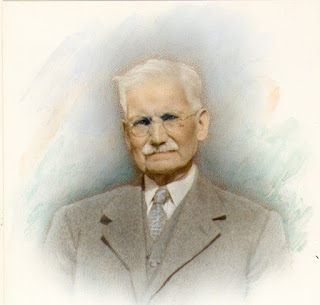 I think Harry was born around 1860 and, according the census returns of 1891 and 1901, his listed occupation is that of ‘Railway Policeman’. Although my fellow researcher suspects this had something to do with railway signalling rather than upholding the law.

Information is scant but, sometime beyond 1901, he became the caretaker of Springfield Hall, Lambeth in London (later, known as Springfield Methodist Church).

One of Harry’s daughters, Alice, was married in Springfield Methodist Church in 1911. Sadly, she died three days after childbirth. An all too familiar tale in those days.

Apparently, the family continued to worship at Springfield for many years which, presumably, means that Harry and his family made the move from the sleepy little hamlet, just two miles from we live at present, to the ‘big smoke’. I’ve yet to discover whether his career with the railway led him away from his roots, or, given his role at Springfield, perhaps it was a higher calling.

This is Mag's great aunt Jessica. Her parents were William and Fanny Hues. The family, including Jessica's older sister, Ellen Jemima, lived and grew up in the Shirley area of Southampton, although Jessica later moved away and lived in Ilford, Essex, where she had two children, Eric and Joan. Beyond this, and her year of birth, we have scant information about her. 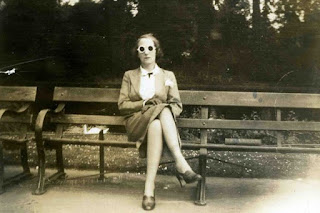 Jessica was born in 1896, and it seems odd, somehow, to see her, a late Victorian, sporting these rather stylish sunglasses. Of course, if she had been a silent movie star, this look would have been totally in keeping. 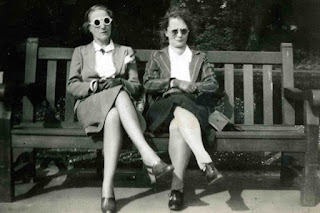 Enjoying a quiet moment on a park bench, Jessica's sunglasses steal the show, putting those of her friend firmly in the shade. 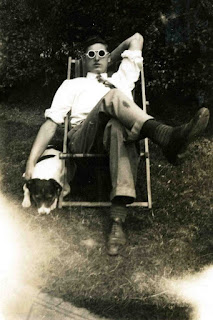 Even Jessica's son, Eric, gets to wear the same, or similar, during this spot of sunbathing.

Today’s offering is a photograph taken at the end of the garden of the house where I was born, ‘Yule Cottage’. 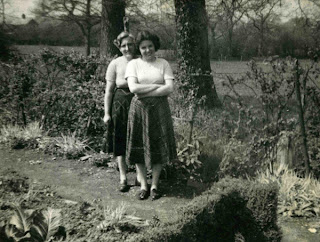 Pictured here, in this mother and daughter scene, is my maternal grandmother, Hilda, and my mum, Christina. It’s an appropriate setting, given their shared love of gardening. My mum has inherited her ‘green’ fingers from Hilda, but we’re not so sure where the horticultural bent originated precisely. Hilda’s niece, Helen, is also smitten, and in retirement, recently returned to further education to study horticulture. She passed with a distinction, so maybe the answer lies in the genes. 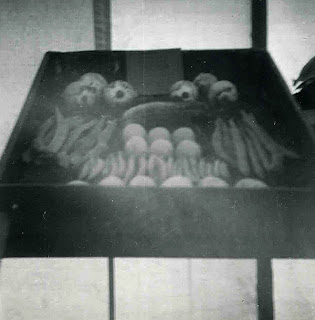 When I was a child, Hilda tasted considerable success with her entries in the local shows. Her lovingly raised flowers and produce harvesting their own share of first prizes and diplomas.

Mum entered in many of the same shows. Not with anything she had grown, but with the wonderful sponge cakes she baked. Her speciality was the classic Victoria sandwich, and her rich reward, the Feathery Flake Diploma.

I’m not one to presume too much of anyone, least of all, our Speckly Woo! But it’s probably fair to say that she knows her grandparents well enough. I mean, apart from recognising us by our physical features, she’s well aware of the parts we play in her young life. 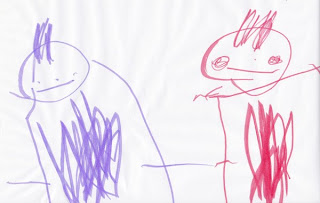 Nan’s the one who helps her out of those awkward ‘girlie’ moments, when underwear just doesn’t do what it says on the tin. Nan fixes the odd snack and magics a wet-wipe out of nowhere when jam tarts leave their mark. Nan kisses bumps and bruises and, when requested to make a ‘Peter Rabbit’ from Play-Doh, produces something guaranteed to have no truck with Mr McGregor.

I’m the one who Speckly Woo! advises to act his age. I’m the stooge in many of her exploits and also the one who constantly negotiates the release of Captain Hook and the crocodile from the ‘naughty tub’. I also convert quite nicely into a slide, a swing, and a climbing frame. No spanners required.........yet!

The above portrait of the doting duo was recently committed to a sheet of A3. At the end of a long day, this is probably just how she sees us. Faced with a month of election fever, this is now how we see ourselves. That’s me, on the left in blue and that’s Nan to the right, in red. Confusion reigns supreme. Perhaps that’ll change after we lose the ‘mohicans’.