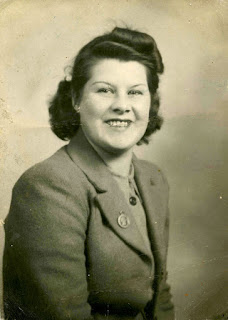 Margaret Gregory was just 23 years old when she died. I don’t know why, but somehow, she looks older in this photograph. This could be due, in some part, to the styles of the day. Perhaps the way she wore her hair, or maybe something in the pose.

To the outside world, Margaret was a lively, outgoing young woman, the youngest sister of my grandfather, Asher Gregory. In truth, she was the illegitimate daughter of Asher’s older sister, and had been raised by my great grandparents, William and Julia, as one of their own.

During WW2, Margaret was a Land Army girl. Her work included delivering milk in the area where she lived, and it was while she was going about her business, one day in 1943, that her life suddenly ended.

So, when one of the tanks went out of control and started to veer off the road, in her direction, Margaret remained oblivious. The driver’s desperate warning was drowned out by the rest of the convoy. Margaret was killed instantly.

At the inquest, the driver of the tank, was a shunned and distraught figure, even though he hadn’t been at fault. It’s not unusual for people to look for a scapegoat in such circumstances.

In the end, it was Margaret’s uncle Asher that eventually placed an arm around the man's shoulder and tried to reassure him that it really had been a tragic accident. Margaret had died, but who knows how this poor fellow coped with his memories of the event?

Where are the Goblins? 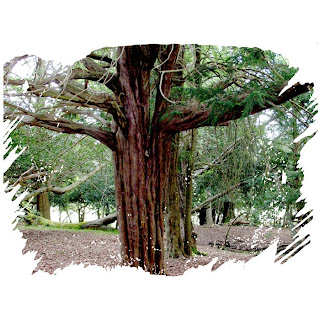 Whoa, one thing at a time.
Hold my hand, and we’ll take a look.

Where are the goblins?

You can’t see them in the daytime.
But you can hear the birds singing.
Listen, did you hear the cuckoo?

But, where are the goblins?

Keep a hold of my hand, we’re approaching the road.

Can you see, over there, a mummy cow and her new baby?
I think the baby cow wants a drink from his mummy.

Can we stroke the baby cow?

We can watch from a distance.

Because we don’t want to disturb mummy and baby cow.

Why can’t we see goblins in the daytime?

Because, then,  we might see the mischief they get up to.

Grandad, I need a wee-wee.

Sepia Saturday: Bertha and the Brothers 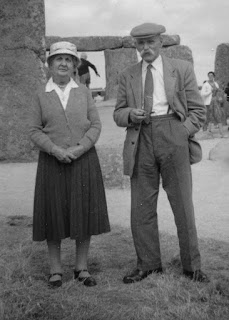 Bertha’s youngest sister, Eva, wrote in her journal, “This was a great tragedy, and Bertha was so shocked, that she and Reg and Ivy came home to stay with us for long periods.”

Her life turned upside down, and left with two young children to raise, Bertha gradually saw a future with her husband’s younger brother, George. They duly tied the knot and, together, they had two more sons; Albert, my father-in-law and Maurice.

Eva went on to write, “George was a very good husband, and became a kind and generous step-father to Reg and Ivy. He was a wonderful gardener.” “Bertha was a very clean and thorough housewife, with a very high standard of cleanliness and discipline: each child had certain tasks to fulfil."

“When Bertha and George were in their 70s, they had to move to an old cottage as a new road was being built, and their house had to be demolished. Bertha had a very long illness when she was middle-aged, suffering from cancer. But she made a miraculous recovery and lived until she was 77.”

In the picture, above, Bertha and George are enjoying a day trip to Stonehenge. The photograph was taken by their youngest son, Maurice, who is still alive and well today.

This week, I’m offering a postcard for Sepia Saturday. It’s no ordinary postcard though. At least, to me, it isn’t. It pictures my great, great grandmother, ‘Jinny’, feeding the swans at Fishers Pond. She and her husband, Wellington, had a smallholding and lived in a cottage at the water’s edge. 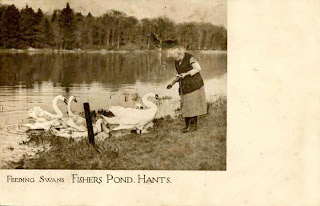 But it’s the reverse side of the postcard that holds a special fascination for me. The card is addressed to my grandmother, Hilda, at Yule Cottage, the place of my birth. 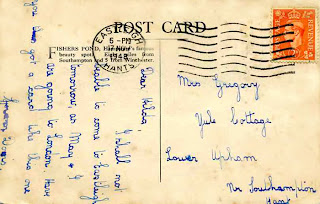 Posted on 17th November, 1948, long before there was a telephone in the house, it carries two messages. The first, cancelling a trip to ‘small town’ Eastleigh in favour of a day out in the capital. The second, an enquiry as to whether or not Hilda is already in possession of this postcard with the picture of her grandmother on it.

The message was sent by Doris Hall, a lifelong friend of Hilda. I remember, when I was a child, Doris visited once a week, cycling the mile or so from Fishers Pond. There was a little ritual that followed her arrival. Doris would always produce a bone for the dog, before she and Hilda shared a pot of tea and caught up with the latest against the hollowed ticking of the grandfather clock. After tea, another ritual. A slow tour of the garden, still in conversation, their words steadily lost among the blooms.

This photograph of my late father-in-law, Albert Edward Charles Maidment, is likely to have been taken when he was about six years old. That would date it around 1926. 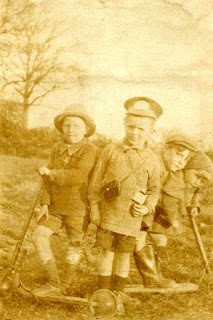 I love the composition of this shot, because it occurs to me that, although the boys look as though they've been posed for the event, Albert (second from the right) and his young pal are actually emerging from behind the two older looking boys, rather tentatively.

To me, it appears as though Albert and his chums were caught in the middle of some improvised game or other. Although it's not obvious what the game was, the two scooters and an impressive ticket collector's outfit, open up a whole range of possibilities.

Whatever they were up to, it was being played out in a open field, possibly on a relative's farm, and at a time of year when there were no leaves on the trees. All members of the gang of four are wearing hats, each one different in style. I'm not sure if it was commonplace for boys to be wearing hats when out to play in Albert's day or whether, in this case, they were regarded as essential accessories for their respective roles.

I can't help thinking that Dennis Potter was inspired by this type of scene, when he wrote his acclaimed television play, Blue Remembered Hills, first broadcast by the BBC in 1979.

This is me, casually sat astride a formidable looking motorcycle, with my mum riding pillion. I’ve no idea who owned the machine, but it’s likely to have been one or the other of my grandfathers. 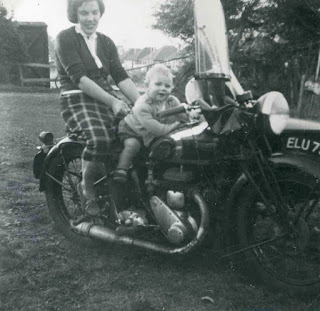 (In a previous post, ‘Belts and Braces’, I’ve reprinted an article I originally penned for the Hampshire County Magazine in 1988. It’s an affectionate recollection of my maternal grandfather’s motorcycle and box.)

My penchant for two wheels saw me progress rather quickly, from tricycle to bicycle, and during my early teens, my thoughts were of little else than motorcycles and motorcycling. A school-friend lived on a farm, and he was also smitten. I visited secretly, and we’d take turns at riding an old Matchless around the fields.

By the time I was old enough to legally ride a motorbike on the public highway, my parents had mustered all their wits and wisdom to persuade me towards four wheels.

I did own a trail bike in the early 80s, but I always felt so exposed on it, after years in a car. The closest I get to biking these days, is on the edge of my seat, as Valentino Rossi weaves his magic around the circuits of the world.