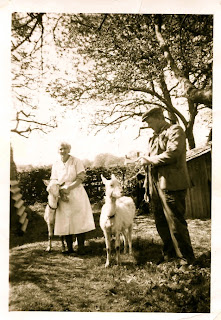 She couldn't stand by and watch when animals were ill-treated. My mother recalls how Hilda would chase gypsies through the village on her bicycle if she ever caught them whipping their horses, chastising them all the way.
No surprise then, to learn that one of her dogs was rescued from the back of a gypsy caravan. 'Little Sally' was an affectionate mongrel who arrived wearing a heavy collar and carrying a heavy heart. For the remainder of her days she had the run of almost an acre of garden and was never tied up or collared. 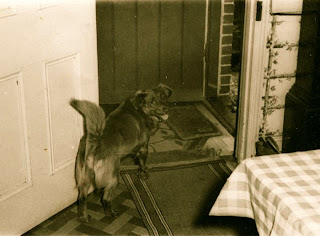 'Little Sally'
In the first photograph, we can see Hilda taking delivery of two goats. Actually, I can't remember these characters staying in residence for long. I can, however, remember a pair of goats called Matilda and History - sadly no photos. Poor Matilda was a sad looking specimen - another of Hilda's rescue stories, no doubt - and History was so sleek….for a goat. If History was a model for Goat Couture, Matilda was the ideal portable clothes rack.
They stayed long enough for us to form an attachment. We drank the milk and took them for walks along the lane, where they tore into the vegetation with gusto. Hilda also used to bring them with her to meet me from the school bus. This might turn a few heads today but, back then, people didn't appear too surprised at anything where my grandmother was involved.
More Sepia Saturday posts HERE