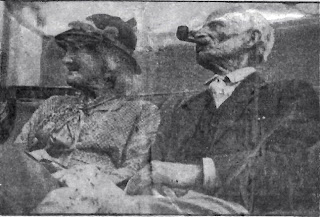 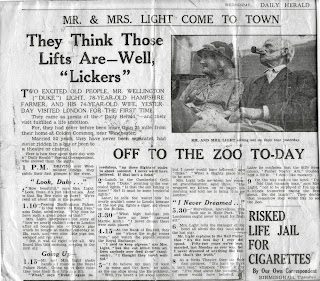 I've been raising dust today, not to mention eyebrows, because the broom cupboard, I call study, was in desperate need of a tidy up. The shredder's been working overtime and the recycling bin is bulging at the sides. I can see my face in my monitor (not all good news, then) and there's space on my desk!

Of course, stuff that I've tidied away, is now lost until the next purge. Conversely, stuff I gave up for lost, has now reappeared. That's not all, I have also discovered items I never knew I had. From within the confines of a crumpled envelope, a handful of old postcards made themselves known to me. 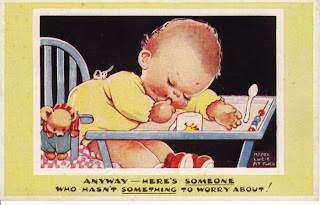 This one, illustrated by Mabel Lucie Attwell, caught my eye straight away. And I was just dwelling on the peaceful innocence, encapsulated in this picture, when my thoughts turned to the next scene in a possible sequence. One where the child has woken up, hungry. How might Lucy have portrayed the scene? 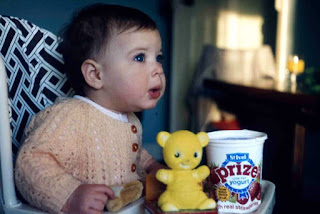 To be truthful, my writing outside of this blog, is pretty stop/start. I do have projects underway, but progress is slow. I know some of the problem…I think too much. I mean, I still try to write within touching distance of the sign that reads, 'RULES'.

Cue Speckly Woo! Yesterday I was, once more, the willing accomplice in one of her colourful, free-flowing plot-lines. Hang on to your hats, it went something like this. 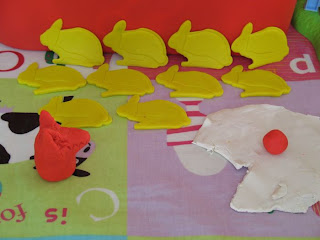 There was to be a party, attended by as many yellow rabbits as a lump of play doh would allow. The rabbits had to remain asleep while Speckly Woo! made a special cake for the celebrations. The cake, which borrowed certain design features that are standard in pizza-making, was topped off with a single cherry. There's a piece missing, and I'll tell you why in a moment.

Enter the bad wolf…or, rather, wolf's head. At first he has been invited to the party because he has promised to stick to cake, and not eat any of the rabbits. Unfortunately, temptation got the better of him, and at least one bunny lost an ear or two. I've decided not to show that scene, as it's too distressing.

Uncharacteristically, Speckly Woo! set about the errant wolf, with a small rolling pin. Then she felt sorry for the poor chap and promptly tore away some the cake to use as a bandage.

With the wolf convalescing, wrapped in recycled cake, the plot took another twist. The remaining cake was to be transformed into spaghetti, for the rabbits, it being their favourite food.
Posted by Poetry24 at 20:08 11 comments: