I've really been enjoying the latest BBC adaptation of Richmal Crompton's stories about the mischievous schoolboy, William Brown, and his pals, The Outlaws. I sit there, sniggering, and empathising with the eleven year old lad who, as yet, has no room in his world for girls.

At the end of a dim and distant 'parents evening', my long-suffering maths teacher, Mr Shields, shrugged his shoulders and confirmed what my mother already knew, too well,  that she had produced the kind of boy that should try harder. My problem was, there were too many better things to do, other than pay attention in class. For instance, I could use my time more creatively by manufacturing miniature blowpipes from empty fountain pen cartridges. Simply snip off the ends, load with wet paper pellets of the correct calibre, and blow. After some practice, it was possible to hit the back of someone's head, from twelve or fifteen feet. 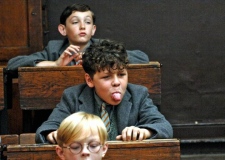 Daniel Roche, as the BBC's current incarnation of William
In my eleventh year, we moved to the town. The lads at my new school seemed to be hard-edged, compared with those I had known in the country. Nevertheless, there were a half a dozen or so I gravitated towards. Our common interests revolved around, tree climbing, football, bicycles, fishing and maintaining a girl-free zone. 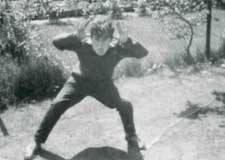 Yours truly. A delightful young man.
I have, largely, happy childhood memories. Those things I wished to be different, were in the hands of grown-ups, so I never got to vote. Not many children do.
Once, my science teacher, at secondary school, held me back after a particularly disastrous chemistry lesson, a little incident with a bunsen burner, as I recall. He warned me that, unless I knuckled down, I would come to no good. Oddly, he seemed to think I had the potential to be a master criminal or a comedian. At the time of our discussion, he hadn't, yet, decided which!
Early signs of me in William Brown mode, HERE.
Posted by Poetry24 at 14:19 9 comments: 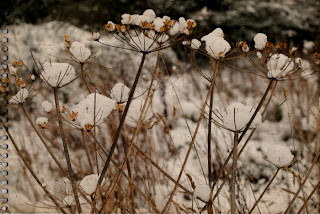 Speckly Woo's recent birthday has ignited another old flame that used to flicker, on and off, in dreams throughout my childhood, and occasionally into early adulthood.

Now, those of you with a psychoanalytical leaning will probably be stroking your chins and quietly expressing your thoughts with a, hmmm…

Let me say, this recurring and unresolved affair, is centred around a birthday present of my own. Some marvellous toy, I could never quite clearly identify. Neither could I recall who gave it to me. But the most trying thing, was the fact that I could never remember where it lived. Obviously it was stored away somewhere safe, but by whom? Was it something so precious, I was only offered the briefest glimpse before it was placed out of harm's way? Did I lock it up somewhere, away from the attentions of a younger sibling?

Perhaps there was a message inscribed on the package, NOT TO BE OPENED UNTIL HE IS OLDER…MUCH OLDER. If that's so, it will have fallen into the hands, or dreams, of another youngster by now.

The rational explanation has to be something along the lines of wishful thinking, doesn't it? You know, the way adults sometimes dream of great wealth. They have the virtual money in their virtual bank, but the new lifestyle that beckons is hazy and fragmented, as a mosaic of mansions, cars, kitchens, and warm climates floats in and out of designer focus.

Sadly, I fear my mystery gift falls into the same category. But, if you have recollections of a vaguely similar something-or-other, from your own childhood, do tell.
Posted by Poetry24 at 22:40 9 comments: 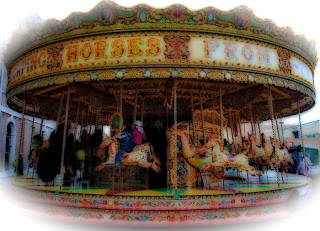 Our three granddaughters have taken centre-stage these past few years but, yesterday, my thoughts drifted back to around ten days before Speckly Woo's arrival. Occasionally, in our lives, we are blessed with special moments, days to remember and people to cherish.

It was my birthday, 23rd November, 2006. I had dropped Mags off at her place of work before heading over to our daughter's house. On arrival, she gave me a birthday hug and handed me a card and CD-shaped gift. It was the 'Love' album, by The Beatles.

We're both big fans. So we sat, with mugs of coffee, the hi-fi cranked up, and the music playing. Hardly a comment passed between us. Perhaps, the odd glance as a particular favourite cued up. This was one of those special times, a father and daughter experience. A string of time holding those jewelled moments. And at the heart of it all, a tear. Not a tear of sadness, but a tear of joy that sprung deep from her childhood. Something connected without warning, as the album progressed into 'Octopus's Garden/Lady Madonna'. Whatever else, it was a shared instant of joy, not to be analysed or investigated. Merely held, and kept safe.