An Apple For Teacher?

Everyone will have an opinion on the co-ordinated strike action taken by thousands of public sector workers today, 30th June. And, my guess is that those opinions will be pretty polarised. 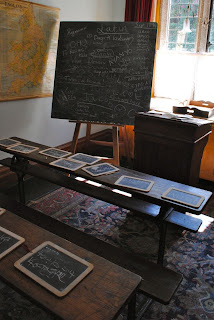 This isn't a blog that lends itself, naturally, to political debate, but I am passionate about having an education system that delivers for our children. Successive governments have tinkered with the great, creaking sausage machine that we inherited from the age of the industrial revolution. As with any antiquated device, expert care and attention needs to be applied, if it's to carry on working at optimum efficiency. In short, it's dependent on talented, well trained, teachers (in that order). I'm no expert in fiscal policy, but I do know that if you start devaluing people's pensions and rewriting contracts to help patch a hole in the nation's purse, hackles will be raised. And, I understand the Hutton Report recognises that existing public sector pension schemes are sustainable in the long term.

I heard a mother being interviewed on the radio. She spoke passionately and told of how she would try to help keep her child's school open on the day of the strike. When asked how she felt about the teachers taking industrial action, her main gripe was parents having to arrange child care for the day. Arranging child care is another area I'm well acquainted with, and I do understand the pressures that mums are under, particularly working mums. But there was something about this mother's tone that I've since heard, over and over, in the build up to today. It seems that the word 'education' rarely slips into the conversation, which is a shame, because we're left with the impression that parents see child care as the primary function of their schools, with a few lessons thrown in for good measure.

For what it's worth, I don't think that teachers are being greedy, militant or self-centred. I do believe that they are yet another body of professionals, elevated in the public consciousness, and held up as paragons by countless point-scoring politicians, only to be sold short, now, in a crude money saving exercise.

Yes, quality education is expensive…but what price ignorance?
Posted by Poetry24 at 13:19 14 comments:

Peace, Love...and all that

Campaigning for peace is nothing new. Movements spring eternal, and for good reason. If you live and breathe, you're likely to be sensitive to the suffering of others. Maybe you're able to gauge the quality your own existence, measured against the plight of those in war-torn parts of the world. Maybe you'll be most acutely aware of starvation, as you raise food to your lips. Maybe the value of warmth and security dawns, as you turn off the light before sleeping soundly.

Today, Father's Day, I'm thinking particularly of the most vulnerable, those who have had their voices drowned out by the roar of conflict, or have become mute under the heel of oppression. Mostly, I'm thinking about the children. I can't bring light to their lives, but each time I give my own daughter a hug, I can remind myself of what it means to love, and to be loved.

First story, the sad news of Brian Haw's death. Brian was an uncompromising peace campaigner. He was committed to a cause. His heart was in it.

Second story, the sad case of the iconic becoming ironic. Ringo Starr, habitual giver of the 'peace and love' sign, fails to fill the Liverpool Empire. Perhaps, after all these years at the cymbals, he's more comfortable with symbols.
Posted by Poetry24 at 14:08 6 comments:

Gift From a Flower...

Thirty two years ago, at around 04.30 we were racing in the direction of our local hospital, where Mags and I would receive one of the greatest gifts of our lives, another life…a baby daughter. 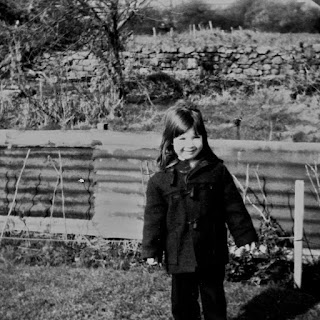 So, on this day of birthday celebration, I thought I'd share one of my favourite photographs of Heather, as she was snapped in our garden, wearing her little green duffle coat sometime in the early 80s. Sweet, wasn't she? And, she still is.

Happy birthday Heather. We love you.

Sepia Saturday: A Pub, Postcard, and a Private called Frederick

Fifteen years on from my father-in-law's death, Mags and I uncovered a box of his assorted documents and personal effects, in a cluttered cupboard. Along with identity cards, apprenticeship papers and various invoices, was a postcard, tucked into a rather ragged envelope. On the front, a fairly plain photograph of a Hampshire pub, the New Inn, Hounsdown. It's still there and, after a spell as The Red Deer, it trades under its original name these days. 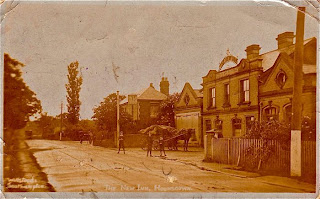 Given that my father-in-law grew up in Hounsdown, it seemed reasonable to assume that he had held on to this as a kind of keepsake. Only when I turned the card over, did I feel the weight of personal history associated with it. 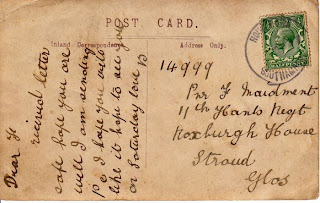 It had been sent to a twentysomething soldier, serving in the 11th Hampshire Regiment. The 'F' in Dear F was Frederick Maidment, the first husband of Mags' grandmother, Bertha. The message had a simple familiarity to it, 'Dear F received letter safe. Hope you well. I am sending pc, I hope you will like it. Hope to see you on Saturday. Love B.' The two of them had been married since 1909, and had two small children, Reginald and Ivy. Now Frederick was caught up in one of the most catastrophic episodes in history, World War One.

Young Bertha's writing is full of hope. No one will know how many prayers she offered up, but we might accurately guess how many sleepless nights and dreaded days she endured.

The card was most likely sent to Frederick when he was training, ahead of playing his part for King and country in France and Flanders. I couldn't say with any certainty. 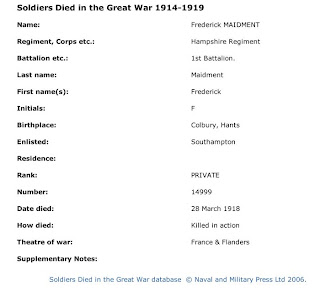 What is certain, is that Frederick survived the horrors until 28th March, 1918. He fell in France, aged 29 years. 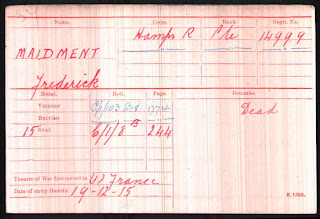 A decade after Bertha had married her beloved Frederick, she married again, in 1919. She married Frederick's younger brother, George. Bertha had two more children, Albert (my father-in-law) and Maurice (who sadly passed away, only last month).

If you're interested, you can read a little more about Bertha and the brothers, HERE. And, I posted a short piece about Albert, HERE.

For someone who had always felt he was pacing through life, just a fraction 'out of step', family history research became much more than a series of fascinating discoveries about the lives of those who had passed before. The travels, trials, and general antics of my forebears provided me with certain markers. A means of finding where I might fit into the scheme of things.

After losing my beloved maternal grandparents, I weathered storm of grief, during which, I was partially torn up, my roots exposed.

Propagation of the family tree, forced me to examine runners of DNA stretching away into history. Fed on fresh records and nurtured with keenly researched detail, it steadily grew to a manageable size. Small enough that I didn't lose perspective, yet still large enough to accommodate me in the sturdier branches of its canopy. 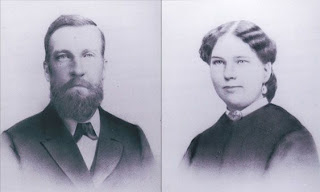 John Hodges and his wife, Sarah. Paternal 2 x great grandparents.
I've taken the project just about as far as I want to now, which makes me think I must be comfortable with who/where I am. I have learnt that the fact I have a much stronger association with my maternal line, has little to do with my dislocation from a paternal influence, at an early age. For me, there are indisputable similarities that are set in the actions and reactions of those, long gone, maintaining a shared instinctive connection through time, a kind of maternal magnetism. 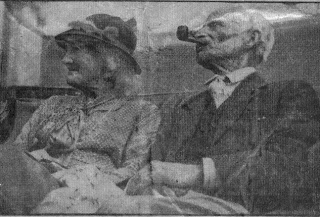 Eliza Jane and her husband, Wellington. Maternal 2 x great grandparents.
I know I've touched on this briefly before, with one or two people, but sometimes it's as though a hand reaches from nowhere, and guides you to where you should be. It's a feeling so difficult to articulate. It's a chain of consciousness that links us, and makes us what we are.
Posted by Poetry24 at 22:48 10 comments:

Email ThisBlogThis!Share to TwitterShare to FacebookShare to Pinterest
Labels: a sense of place, family history

Like many grandparents, I live in hope, that as my grandchildren develop, the changes will be for the good.

I feel reassured by these 'before and after' images, drawn by Speckly Woo this afternoon. I have it on good authority, from the artist herself, that she will only ever be changing from... 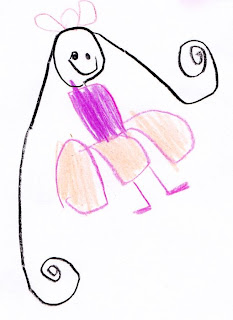 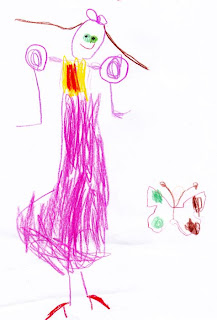 to a fairy...on occasion, and when the mood takes her.

One of life's great joys can be found in watching your grandchildren develop and grow. First steps, first words, first creative expression with large crayons and paint.

Recently, I heard the first joke,

"Grandad, why did the banana go to the doctor?"

"I don't know. Why did the banana go to the doctor?"

"Because he wasn't peeling very well."

And there are those little rituals. For instance, whenever we first arrive at the house, through a process I haven't completely sussed out yet, I can be switched from climbing frame to slide, and bouncy castle in just a few a minutes. I'm sure it's all done with mirrors.

At the end of a visit, we used to say our farewells with a kiss and cuddle, before they all toddled off to busy themselves with matters more urgent than seeing their grandparents disappear. Now, we get the full chorus of goodbyes, blown kisses and…funny faces, from the doorstep. Yes, it's that time folks, when the tongues are popped out, the thumbs and splayed fingers twist at the temples like mini antlers on hinges, and the competition is on. I found that responding in a likewise manner, came very naturally to me, and I was a little puzzled... 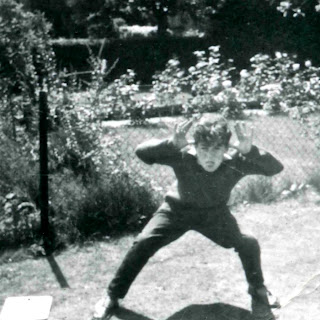 until I discovered this photograph!
Posted by Poetry24 at 08:26 11 comments: