Speckly-Woo, Scooby-Doo, and the Slippery Slope

An elderly neighbour (88 yrs) has given up his flat this week. He's moved to a residential home where, hopefully, he'll be in receipt of 24hr care. When I drove by today, his windows were all open and there were shadowy figures moving about in his empty living room.

Until he moved, he had a carer who visited twice each day, neighbours who called in regularly and a postman who stopped every morning for a cuppa. His devoted daughter lives only a stone's throw away and from his chair at the window, he waved to, and received waves from, pretty much everyone who passed by.

The main reason behind his decision to go into care? He was frightened of dying alone. In spite of the fact that he was never without company for very long, the worry that his time might come between visits or during the night, was too much for him to bear.

Three more of our closest neighbours are in their 80s, live alone and independently. They march on, keeping as active and involved as their ailments will allow.

At the opposite end of the scale, Speckly Woo came up with this charming group portrait of the cartoon cast from Scooby-Doo! Mystery Incorporated. In case you're not familiar with these animated sleuths, they are, left to right: The Villain, Scooby-Doo, Shaggy, Daphne, Velma, Freddie.

Of course, these characters won't be going into care any time soon. They haven't shown any visible signs of ageing, in over 40 years!
Posted by Poetry24 at 20:49 11 comments:

When I was only just into double figures, I developed a sudden passion for angling. Angling to get out of school, angling for more pocket money and, would you believe it, angling with a proper rod and line. 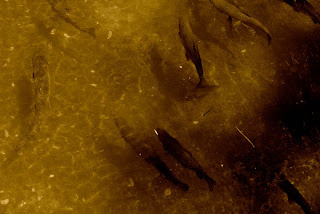 I'd spend countless hours going cross-eyed, watching my float for signs of a bite, and a disinclination to choose between freshwater or sea angling, meant I could be crabbing off a local pier or trying for trout from lush lawns belonging to a friendly hotelier. My stepbrother, Tony, was his Chef, and my chance to cast a line in the River Avon was a perk by proxy.

Two memories from those days come to mind. The first, when I shared the same perk with Ollie Kite (see clip below) and how he was fascinated with the sweet-dough bait Tony had prepared for me. Secondly, and oddly, the vision of another boy, younger than me. He stood shivering next to his father, reluctantly casting out and reeling in. Suddenly, the winter stillness was shattered when the boy sneezed. A long trail of mucus streamed forth from his nose, got caught in the cold breeze and wrapped itself around his two skinny legs.

Events took a darker turn when I naïvely accompanied a school pal and his brother to a tributary of the River Test, early one morning. A little light poaching was what they had in mind. I had plenty of time to consider how daft I'd been, whilst laying low until the bailiff's heavy footsteps receded. Weeks later, taking a short-cut across country, I was surprised to find myself outside the bailiff's cottage. Fixed on either side of a weather porch, bleached Pike skulls emerged from the walls, like limbless, predatory ghosts. The bailiff had a fearsome reputation and, although I was pretty sure his collection of trophies didn't include any schoolboy-shaped skulls, I just kept walking...quickly.
Posted by Poetry24 at 20:59 7 comments:

Trees aren't really in need of adornment beyond foliage, flower and fruit. Any 'extras' merely interfere with the messages transmitted in shape, position and movement. Some of the most persistent negatives of our throwaway society, are those discarded items that end up all twig-tangled and torn among the branches. Carrier bags, for instance. High on the wind, their rising, tumbling bid for freedom ends, as it does for many of us, with a snag. Defiantly wrestling the elements, they're held firm until they represent little more than faded shreds, ribbons of residue, symbols of cock-eyed consumerism. 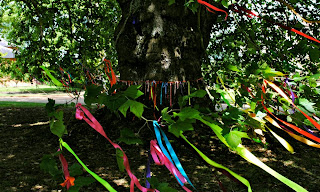 So, when I first saw this beautiful tree in the grounds of Mottisfont Abbey, trailing coloured strips from its trunk and limbs, I wasn't sure how I felt. It's a memory tree, each tied length of tape representing a thought, a snapshot of a time in a life. 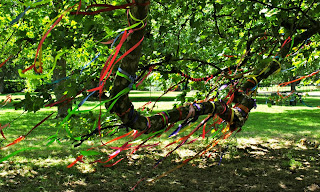 As I assisted our granddaughters in attaching their chosen ribbons to low hanging boughs, a swell of emotion indicated to me that this was something special, this dreamy display, this roll call of reminiscence. As the breeze picked up, I found myself asking, where better to secure those fluttering frailties we call memories, than from the arms of a tall tree?
Posted by Poetry24 at 09:47 12 comments:

Three small girls, always just a few paces ahead, skipping, galloping, pausing to listen. Clover flowers and buttercups in tiny fists, and a breeze held, momentarily, in their blonde locks. 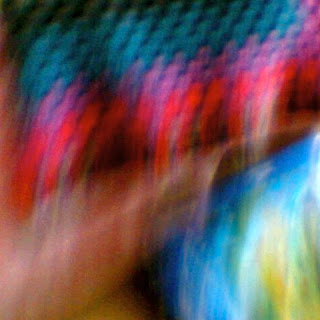 A long walk for short legs, all the way to the little bridge and back. Each in turn, they're raised up to look for trains. Blue eyes waiting for an engine to loom large on the zip-like tracks. Watching for one to tear down the line and undo the countryside.

No trains today, but not too much disappointment. Instead, held hands, and pointed fingers with questions dangling from each tiny tip. Questions like, "What are a dog's bones made of?" and "How did Jesus, on our Christmas card, die and then come back to life? Other people don't come back after they've died, do they?"

I have questions too, how do children manage to point at a tree or a bird, and promptly make enquiries about resurrection? And, why do we, as adults, think in such a cluttered and less colourful fashion?
Posted by Poetry24 at 22:37 11 comments:

Tell Me Another One, Do

When you're feeling a bit weary of listening to politicians spouting their convoluted messages, and you can no longer bend your mind to fathom out how nations can go bankrupt, cue a simple tale from the mind of a small child. 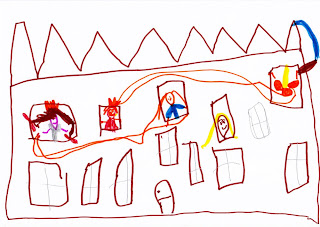 Behold, a castle, where an angry King glares from his window, second from the left. He's angry because none of his daughters will get married. They are the occupants of the remaining upstairs rooms. The one empty window that could qualify as upstairs, isn't, because it doesn't have a brown frame...okay?

One daughter is particularly troublesome. She hangs upside down from the ceiling all day long, her hair flowing beyond her open window and straight into her father's face, where it gets tangled up in his crown. This makes the already angry King turn red all over. The upside down daughter is oblivious, and sets about filling a bucket with water, which she then empties over a turret.

Now, wasn't that so much easier to get to grips with? No? 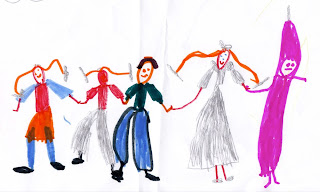 Well, consider this group of friends. They're dancing at a party, and although the effect has probably been lost in the scanning process, silver is fairly prevalent. In fact the girl, second from the left, is from Africa, where all girls wear silver trousers. The boy holding her hand (and possibly stamping on her toe) is a brother, complete with small orange hairband. The lost soul at the extreme right has opted for a long, thin, pink dress, with hood. The hood was uncomfortable with a hair-slide worn beneath it, so it's being worn on the outside, in a very chic and perpendicular fashion.
Posted by Poetry24 at 22:30 14 comments:

Don't panic, this isn't turning into a week of re-runs, but this little film, created and narrated by David Green, didn't really get the airing it deserved when it appeared over at Poetry24 on Monday, due to a technical hitch. Technical hitch with Blogger, I hear you cry...surely not?

Anyway, here it is again. I'd be interested to hear what you make of it.