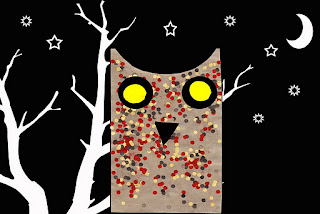 And then, there's this little creation. Okay, I've added a few stars, a moon and a tree, but the owl is the product of our daughter's five year old imagination. It had gone to roost between the pages of a 'schooldays treasure album' more than a quarter of a century ago, and has only emerged quite recently. So, who gives a hoot? Well, I do, of course.
Posted by Poetry24 at 20:31