I recently came across a charming little sketch, by my grandfather, drawn to illustrate an article written by my grandmother, published in the Hampshire magazine, in February, 1977. It's certainly not one of his best efforts, as later works testify, after he had found his medium in oils. 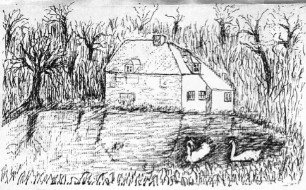 The scene is Fisher's Pond, birthplace of my grandmother. In fact she first saw the light of day in the pictured cottage, at the water's edge. The old place was demolished a few years ago, to make way for a swanky 'new build'.

Now, I don't know if I can draw or paint, as I've never really put much effort into finding out. However, I do enjoy trying my hand at photography, and I love playing around with various apps on my phone camera. Put the two together, and what do you get? 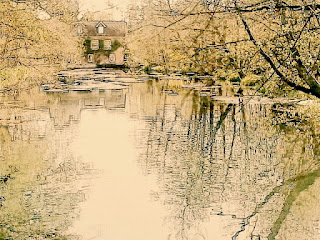 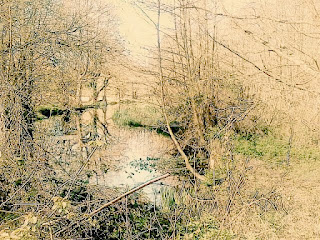 Last Friday, the 13th, I touched on my "natural leaning towards task avoidance and lack of application," in this post.

Today, I was rooting through box-files, looking for some paperwork, and came across a bundle of my school reports. It was interesting to see how different teachers, in different schools, across the years, had much the same to say. The consensus was probably best summed up by my long-suffering chemistry teacher, Philip Webb, when he declared in exasperation, following an episode with a bunsen burner, "Hodges! I don't know if I'm dealing with a hopeless idiot, or a slapstick comic."

The following two carefully selected extracts, date from my time at primary school. Those reports that were sent throughout my time in secondary education do not appear due to excessive repetition.

Finally, my school-leaver's report, which appears to show a degree of optimism about my future prospects. Although, ominously, my attitude to those in authority was noted as being below par. 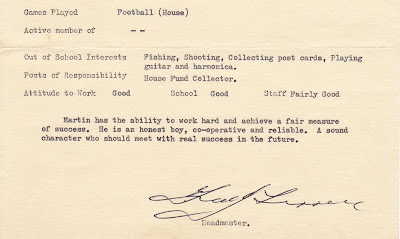 (A re-post, on what would have been my dear Grandad's 102nd birthday.)
This slightly out-of-focus photograph of my maternal grandfather, Asher James Gregory, is one of my favourite images of him. 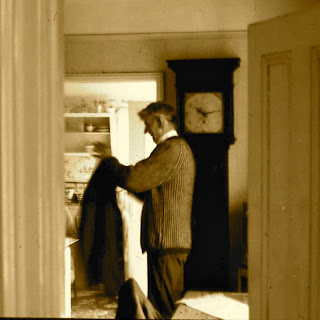 The grandfather clock was working then, and as the time was almost 10.15, Asher had probably just finished a cup of tea, before returning to whatever he had been doing outside. Our daughter has the clock now and, even though the hands have long since stopped, I can't help hearing the slow, regular swing of the pendulum, in my memory.

The table that's showing off one corner is now in our home. There is history to it. My mother used to sleep under it during the war. We have sat around it, as a family, for countless meals and celebrations. Now, my granddaughters sit around it when they visit, and draw their impressions of the world in coloured crayons on it, just the way I did.

The room Asher is standing in, is the dining room. Although, it was always referred to as the 'kitchen'. The room adjoining, is the kitchen but, always referred to as the 'scullery'. Out of shot, in the top right hand corner of the scullery, sat a holding tank, full of spring water, pumped up to the house from a well in the garden. When I look at this picture, I can taste the sweetness of that water.

It looks as though Asher is ready to leave now. He's about to put his jacket on.

As I sit here, watching him, I know the exact smells, sounds and peaceful surroundings he's experiencing in this captured moment. The timeless magic of treasured family photographs.
Posted by Poetry24 at 09:15 6 comments:

Tell Us a Titanic Tale, Jack

I posted about 'Old Jack' before. He was my 2 x great grandfather, son of a seafarer, Benjamin, who died of yellow fever, on the island of St Thomas in the West Indies, in 1857. He had been the ship's baker on the Atrato. 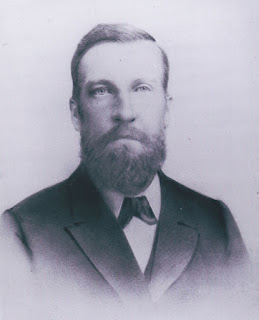 John Hodges would have had a desperately difficult upbringing in the poorest quarter of Southampton. During the years of his childhood, it was recorded that as many as 70 people might share one toilet, and in his 17th year, an outbreak of cholera killed 165 of the population.

Little wonder that he took to the sea in 1867, and that was where he spent a large part of his life. He  was skipper of a pilot's cutter, 'The Deerhound', until the turn of the century, before taking on 'The Jessica', stationed off Hythe.

So, I think it's almost certain that 'Old Jack' would have witnessed the Titanic leaving the port on her ill-fated maiden voyage. What his impressions might have been, I'll never know. He died in 1940, aged 91, so I never knew him. 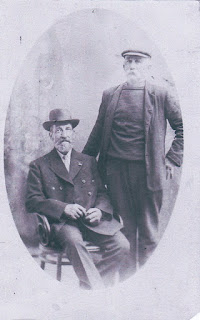 But if anyone could have told a tale of how 882 ft 6 in of Olympic-class ocean liner looked as she left Southampton Water, 'Old Jack' could, with a little help from his old pal, Otto Blow, no doubt.
Posted by Poetry24 at 09:06 10 comments:

A week is a long time in politics, and it's tempting to extend that view to our recent holiday. 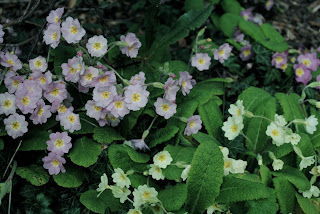 It began with so much promise. 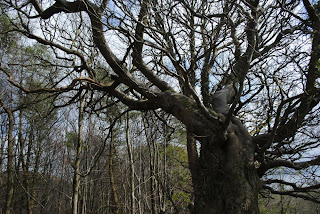 But at times, it was difficult to see the wood for the trees, as the twins went down with their own version of the G.I. (gastrointestinal) Blues. An unplanned trip to the pharmacy, telephone consultations with doctors, and the general malaise associated with the sickroom, all conspired to dampen our spirits.

We did eventually break cover, in winter coats, to make for the beach. And, on Wednesday, we managed an Easter Egg hunt in the grounds of Lanhydrock House. Fortified with hot soup and slices of home-made cake, we trailed around, looking for clues, praying for the day to show some sunshine.

On the positive side, the girls are now back to fitness, and our daughter is catching up. 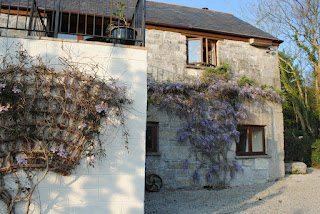 We stayed in this same converted mill last year and enjoyed the most perfect holiday. Unbeknown to us, the actress Claire Sweeney, had occupied the place during the previous week. A photo collage, recording the event, now hangs in the kitchen. Sadly, despite our best efforts, we couldn't replicate her level of joy, this time around.

But I left you with a note, saying I was gone looking for seashells. 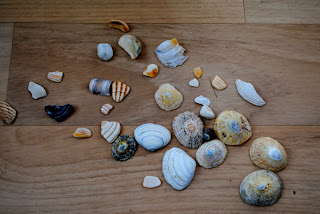 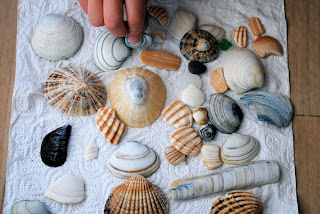