If I had to choose between cats and dogs, dogs would win on points. I mean, I like the look of cats, well, most cats. I like the way they move. I admire that certain aloofness and the seductive purr. I don't like the way they wail in the middle of the night, having forgotten their key. I don't like their habit of leaving pernicious presents in flower beds and vegetable plots, for others to grab unsuspectingly whilst weeding. And news like this, doesn't help either. 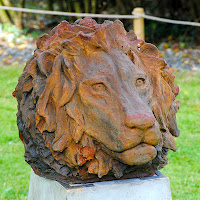 Dogs probably clock up just as many negatives, so it must be a childhood experience that's responsible for tipping the scales. I would have been about six or seven years old, and had been sent to leave a loaf of bread at a house in our village. The house, at the end of a rough track, belonged to a middle-aged woman and her brother.

My instruction was to leave the loaf in a bread bin, on the bench, in a lean-to shed that adjoined the house. The shed was only lit by a small window above the bench, and it took a while for my eyes to focus. I stepped, gingerly, towards the spot where a white enamelled bread bin had been placed. I lifted the lid and set the loaf down inside.

As I was making for the door, something caught my eye. Now, given the array of odd objects that were scattered around the shed, hanging from nails, or strung up with binder twine, I wasn't that surprised to see a Guardsman's bearskin just out of the shadows, at the opposite end of the bench to the bread bin. Wow! I just had to get my hands on it; maybe even try it on. I reached out and raised it by grabbing two handfuls of fur. My mind was full of me, as a soldier, as a tall uniformed Guard at Buckingham Palace. I felt a surge of courage, invincibility even. Until, that was, the bearskin unfurled in my grasp, grew swiping claws, and attached itself to me, screeching and crying with a ferocity that shook dust from the ceiling.

I've never been exactly sure which of us had been most frightened. It may well have been the cat. I remember the thud as it ran headlong into the door I was so keen to shut on the whole episode.

I wonder if it actually outlived its owner?
Posted by Poetry24 at 14:05 13 comments: