In wishing you all a Happy Christmas,
I thought I'd take the opportunity
to remember two more Grandfathers
in my family line. 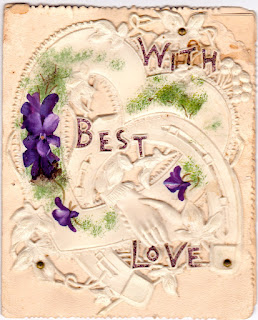 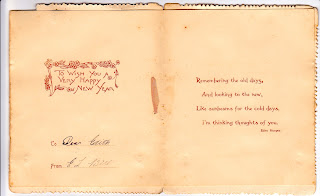 This, sent from the front, during the First World War,
by my Great-Grandfather, William Benjamin Butler,
to my Great-Grandmother, Edith. 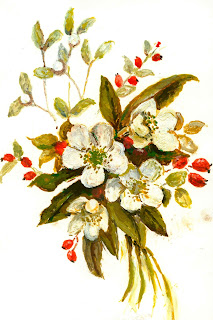 This, painted by my own Grandfather, Asher,
towards the end of his long life.
A Very Happy Christmas
&
Every good wish for 2013!
Posted by Poetry24 at 08:32 8 comments:

Something for the Journey

When we set off on a journey through parenthood, most of us have little more to guide us than a few verbal directions. And the problem with verbal directions is a significant one. More often than not, people who know where you're heading, having trodden the route themselves, attempt to get you to your destination via their own wrong turnings, past long demolished landmarks. It's a confusing time. So confusing, in fact, that you'll soon be thumbing your way through handbooks filled with theories and bullet-pointed lists on how to put one faltering foot in front of the other.

For most grandparents (usually those who haven't elected to become providers of half-remembered directions) the expedition is less of an ordeal. If undertaken correctly, the way through and around grandparenthood is achieved in a series of small steps, unexpected stop-overs and a reintroduction to the wonders of art. There will be little hands to lead you in any number of merry dances, and episodes of razor-sharp logic, to which you will respond in ways that are both delightful and surprising...especially to yourself. 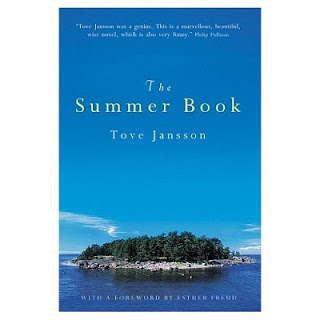 My daughter bought me The Summer Book by Tove Jansson for my birthday, last month. It's not exactly a tome, so I've no real excuse for taking so long to read it. But I finished it this morning, and I know that it's a book I'll be keeping close at hand as I progress through grandparenthood. I won't say more than that. Well, I will actually. Read it!
Posted by Poetry24 at 14:53 5 comments:

You can call me Ga

Today we received a special 'thank you'
from Speckly Woo! 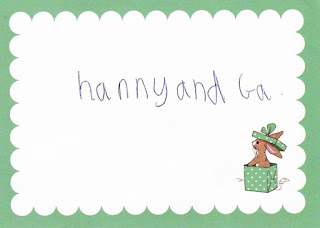 Notice the envelope is addressed to Nanny and Ga. 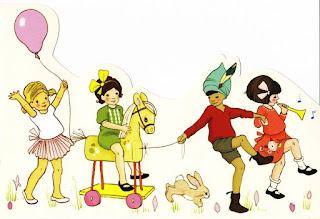 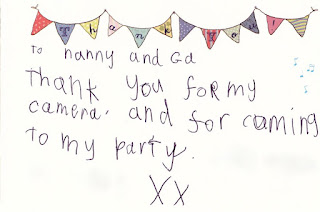 When the twins had their first stab at calling
me Grandad, it came out as Ga, and now all
three girls have settled on it.

I think there's a certain charm about the word, 'Ga'.
Of course, when the twins are both
vying for my attention, there are choruses
of Ga, Ga! On occasion, I have to remind myself
that this is their name for me, not a reference to
my mental state...yet.
Posted by Poetry24 at 11:29 11 comments:

Email ThisBlogThis!Share to TwitterShare to FacebookShare to Pinterest
Labels: Ga, Granddaughters, Thank You

In response to our Education Secretary's curriculum reforms, the former Children's Laureate, Michael Morpurgo, recently stated, "It is really important that focusing on things such as spelling, punctuation, grammar and handwriting doesn’t inhibit the creative flow. When I was at school there was a huge focus on copying and testing and it put me off words and stories for years." He was warning against stifling a child's creativity with an overbearing emphasis on academic rigour. 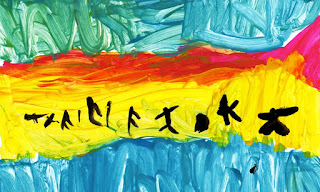 Colourful, but has clearly misunderstood the importance of artistic convention.

Of course, it's important to have the tools to facilitate expression and to communicate ideas clearly, but I find myself rejecting the argument that creativity should play 'second fiddle' to the instillation of academic rigour. If that's the case, the clarity and insight of storytelling in a child's early artwork surely comes under scrutiny? And, if we accept that creativity can only flourish in the florescence of formalisation, what sort of creativity are we settling for? When a child's imagination is in full flow, it's nothing less than sabotage* to inflict the rules of grammar and punctuation in the interests of standardisation. Rules should be introduced with the greatest care, to ensure that a child's work is the best it can be, with the minimum of compromise.

I know from my own experience that young minds deliver the most wonderful scenarios without pausing for breath. Colour and content usually gets blended to produce some delightful impossibilities that punch far above any set grammatical weight.

Surely, what we need is balance. I know there are a number of you out there who are writers and/or teachers. How do you see it?

* Sabotage: deliberately destroy, damage, or obstruct (something), esp. for political or military advantage.
Posted by Poetry24 at 16:00 5 comments:

Tales of Turbos and Automated Tellers

When Prince Charles was asked how he felt about becoming a grandfather, he quipped, "How do you know I'm not a radio station?" Very Goon-like, I thought. And so it was, the rest of my morning continued on the taut edges of surrealism.

I had to fetch my car from the garage, after the turbo failed earlier in the week. The price tag was, shall we say, 'otherworldly'? Prior to driving it home, I stopped at the bank to withdraw some cash. As I stood there at the ATM, wondering if it would actually dispense the few pennies remaining in my account, a voice from behind me stated, "We must be mad, standing here."

I turned to see grinning face, waiting for a response. I couldn't muster one, so the man continued, "Chap was held up here, at gunpoint a couple of days ago." Then I remembered, there had been an item on the local news, although I don't remember any mention of a gun. "He's welcome to my last few pennies," I said, "I've just had a new turbo fitted." The grin disappeared, and the man's gaze narrowed. Perhaps I should have made it clear that it was the car that had received a new turbo. As I walked away, I swear he waiting for me to suddenly accelerate into the distance. 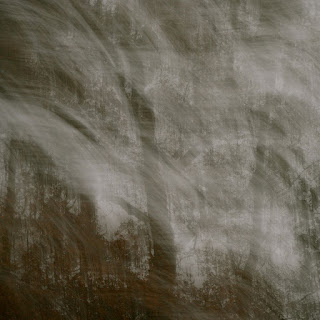 Just before lunch, I was sorting through a few photographs, when I came across one that may well have captured the very moment that winter drained the last drops of colour from autumn, in rather the same way that turbos drain the last copper from your bank balance.
Posted by Poetry24 at 14:21 4 comments:

Speckly Woo has been on number of school trips in recent weeks. The Big Draw at Salisbury Cathedral, a visit to Parish Church of St. Margaret of Antioch, the resting place of Florence Nightingale and, on Monday, a chance to bake reindeer biscuits, courtesy of Waitrose. All in all, an interesting and stimulating range of activities.

I tried to recall a moment from my early days at school, that didn't include sitting with a finger on my lips or standing in the corner of the room. Then it came to me, my first experience of magic, close up. It was at about this time of year and some seasonal entertainment had been arranged in the hall adjacent to our school. Before we were let loose on the cakes, buns, and lemonade, we sat in quiet rows to witness the wonders of a real magician. We all oohed and aahed as kids do on such occasions, as bunches of flowers were produced and playing cards disappeared. Then for the big finale, which involved fire. Yes, real fire, only feet away from innocent young children. I think the object of the exercise was to ignite some accelerant or other, clamp a lid on the receptacle, then remove the lid to reveal something wonderful. We would all drop our jaws in unison, and send our entertainer on his merry way with an enthusiastic round of applause.

Unfortunately, upon removal of the lid, the only wonder was that the hall didn't burn down. Flaming debris flew into the air before cascading all around the poor man's feet. The accelerant flared to eyebrow height, something that provoked a good deal of arm waving and stamping of feet.

I have no recollection of what happened next. Someone gave the instruction to tuck in, and we dutifully complied.
Posted by Poetry24 at 14:52 2 comments:

How Do I look?

I celebrated another birthday a little over a week ago and, touch wood, I'm feeling fine. But how do I look? 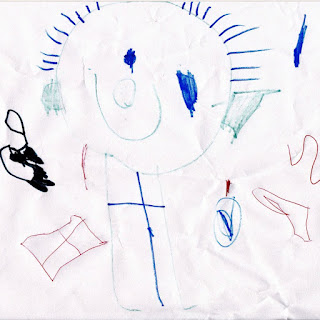 Well, on the down-side, I could probably do with gaining a little weight, undertake a serious search for my missing leg, consult an Ophthalmologist, and tackle the mould that's growing on my ears. On the plus side, my hair has regrown, I'm smiling and surrounded by all my latest ideas. I just need to figure out what they are. Nothing new there, then.
Posted by Poetry24 at 07:32 14 comments:

Tied up in Knots

There's something heartening about the sight of children getting their heads together. Whether they're attempting to solve a riddle, crowding over a rare 'find', or simply concocting something designed to trip up the adults, the huddle is the formation of choice. 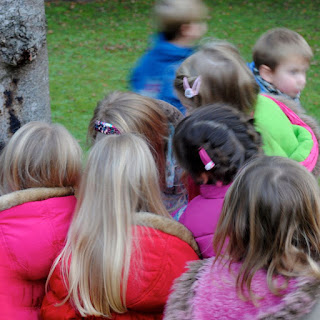 Bunching together is something we tend to steer clear of as we grow up, unless we're participating in one of those bonding exercises, so often central to team-building awaydays. More often than not, we're happiest within our own carefully created spatial parameters, although there's nothing quite like the high street sales for turning off our inhibitions to a point where we feel ready to join the scrum.
Posted by Poetry24 at 15:51 3 comments:

SW at Six, with Scooby Snacks

Speckly Woo will be 6 years old tomorrow, 3rd December. I'm not going to spend time scratching my head, wondering how we got to this point so fast. For one thing, I might get a splinter.

So, although tomorrow is the big day, there's a party going on this afternoon. Around twelve children and as many adults, should ensure a busy atmosphere. I know that SW's Mum has been extremely busy with preparations, and as she's already posted a picture of the cake on Facebook, I'm going to share a sneak preview with you, here. Don't worry, SW never looks at my blog. It's just not 'Scooby-Doo' enough for her. 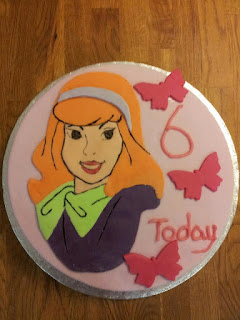 I wonder if this would qualify as a Scooby Snack, in Shaggy's eyes?

According to Wikipedia, "In Scooby-Doo! The Mystery Begins it is revealed that Shaggy made up the recipe which includes sugar, flour, dog kibble for texture, and other ingredients."

I think I'll check Monty's dish before I have a slice. You can't be too careful.
Posted by Poetry24 at 08:52 8 comments: