Regrets? Too Few to Mention

I’m a bit of a sucker for ‘top fives/tens’, particularly when they apply to the way we go about our daily lives. So I couldn’t pass up the opportunity to scan through the top five parenting regrets, according to psychologist, Dr Angharad Rudkin.

Although it’s a while since our daughter was a child, I thought I’d run the risk of a bit of hand-wringing and see how I fared in the regret stakes.

1.    Well, in the early years, I was unemployed for a considerable spell and, working on the double-edged sword principle, times were tough but our little girl had my undivided attention for a longer period than most. Having said that, it was our belief from the start, that our child would always have a legitimate claim on our time, no matter how busy our lives might be. – No regrets.

2.    As far as was practically possible our daughter was, first of all, included and later consulted, during most decision-making processes. Despite financial constraints, we let her explore any number of different interests, and when she settled on playing in the village and school silver bands, much of our recreational time was spent ferrying her to and from gigs. – No regrets.

3.    Good manners and consideration for others was a ‘must’, as was the cleaning of teeth, honesty and taking responsibility. Arguments over the wearing of coats, wellies, etc, never happened on my watch. My attitude was, look, it’s freezing out there, if you don’t put your coat on you’ll be cold. If you complain about being cold, don’t be surprised to hear me say, “I told you so.” – No regrets.

4.    In a rush of blood to my young and inexperienced head, and under exceptionally difficult circumstances, I once tapped the back of our daughter’s legs. The shame of that incident affected me deeply. Even 30 years on, it makes me want to weep when I see parents screaming in the faces of their kids, let alone raising a hand. Throughout her growing up, there hasn’t been a single area we’ve regarded as taboo. We’ve encouraged openness and honesty in all things, even though that isn’t always the most comfortable route. – Regrets? I still wish that tap on the legs hadn’t happened, but parenting isn’t a one-way street, and there are lessons to be learnt by the adults, too.

5.    The guilt trip is so often unjustified, in my experience. Usually it’s parents being unreasonably hard on themselves, and these days guilt is probably more prevalent than ever, as parents find themselves increasingly in the grip of the ‘fear of failure' culture. I think, as parents and as individuals, we’ve been fortunate in that neither of us have ever set our sights unrealistically high. – Regrets? None that would keep me awake at night.

In all of this, there is one important thing that doesn’t get mentioned explicitly, and that is unconditional love. It’s among the greatest gifts we can offer our children. To hold them in our hearts in the hope that they will do the same for us, but not thinking any less of them if they come up short.

I try to avoid politics on this blog generally, but a couple of things have amused me this week. First, the press regulation fiasco with the main parties, each claiming victory after displaying more fudge than a West Country sweet shop. Lots of semantics antics, as you might expect.

Today, a headline in the Telegraph, "David Cameron's 'slur' on stay-at-home mothers" drew my attention. I thought that all politicians undertook 'media training' these days, but whether that's true or not, many of our elected representatives consistently have a serious problem with language and communication. Apparently, the response from David Cameron's official spokesman, when asked if the Prime Minister considered stay-at-home parents to be in lesser need of state help than working parents, reinforced the Coalition's clear priority towards “aspiration”.

Putting the debates over financial assistance to one side, I'm left wondering, as many stay-at-home parents undoubtedly will be, when their particular parental pathway ceased to include dreams and ambition.

A Spell of Reading 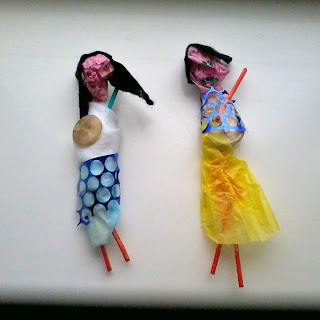 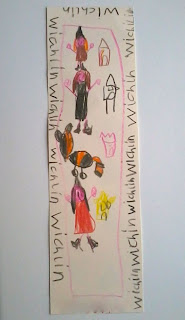 and a bookmark depicting  some of the
usual suspects from Ruth Symes' books.
Note that somewhere in the
spell casting, letters 't' and 'g' have vanished.
Witchling, though, is a current bedtime favourite.
Posted by Poetry24 at 08:16 6 comments:

Look Before You LeapPad!

When you're three years old, and you have a camera in your LeapPad, it's only natural that you'll find yourself looking 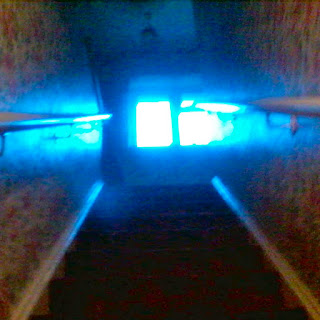 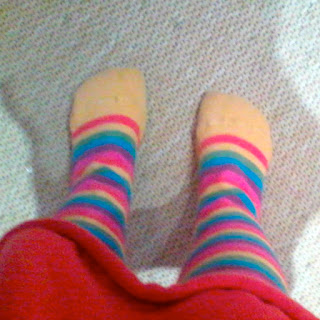 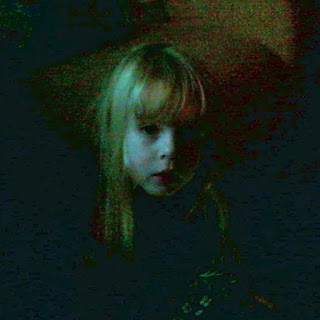