Head-scratching and a Possible Snowman

Although some of us won’t readily admit it, unravelling a mystery or solving a puzzle can give us quite a lift. Who doesn’t know that niggling feeling that comes from knowing the solution to be simple, but for dear life we can’t quite grasp it. The glaringly obvious solution to a crossword , but having already made it clear that crosswords aren’t your ‘thing’, revealing the answer isn’t an option, leaving your inner detective well and truly thwarted.

We live in a puzzling world, whether you find yourself preoccupied with the secrets of Dan Brown’s Archimedean spiral, or just trying to fathom out what Russell Brand means in his reference to parliament: “The whole joint is a deeply encoded temple of hegemonic power.” 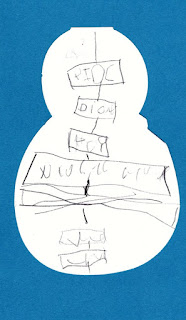 Yesterday, SW’s little sister, who she occasionally refers to as ‘Thing Two’, presented me with a rather charming, if somewhat cryptic piece of handiwork. Is it a flow chart, designed for use at a snowmen’s conference? Perhaps a series of coded ideas contained in the shape of a light bulb? Whatever the rationale might be, it’s likely to remain an enigma. My guess would be that it’s actually many things and nothing at all. The perfect example of a fertile imagination, one that might well prove useful for solving riddles in later life.
Posted by Poetry24 at 12:00