Where's an elephant when you need one?

I have a good reputation for being punctual. Never late for school, never late for work. One of my bosses from the 70s declared, “I know if you’re not here to clock on at 05.00, you’re not turning up at all.” A sort of backhanded compliment, I suppose. Also a reflection of my career ambitions in those days. An indifferent attitude to a dead end job, the likes of which you could leave in the morning to find another in the afternoon.

Anyway, I’m disappointed with myself, to discover that I missed posting on Square Sunshine’s fourth anniversary, which was three days ago. 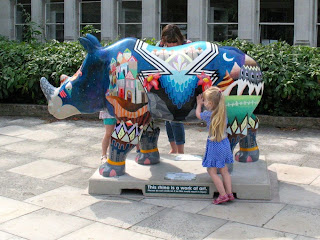 An elephant never forgets. I wonder how rhinos fare?

It’s not that I had anything special to announce, and besides, my head was full of Manet and Land Art. What I would have said was a big THANKS to all of you who continue to visit this blog. I sometimes wish the posts ran to more of a theme, but those thoughts and observations in the header, keep coming. I never quite know what I’ll post about next, and you never quite know what to expect. I’m happy to keep it that way, and I look forward to sharing a little slice of my life with you for a long time to come.
Posted by Poetry24 at 09:24 8 comments:

When Katie Hopkins appeared on the This Morning programme and announced, “I do judge children by their names ... For me, a name is a shortcut of finding out what class that child comes from,” there was a nationwide gasp of disbelief that could be heard way beyond the confines of daytime television.

Hopkins went on to say, “I tend to think that children who have intelligent names tend to have fairly intelligent parents and they make much better playdates for my children.” But hang on, let’s not forget these are statements made by the Queen of Conflict. You know, the woman who declared she wouldn't employ fat people “because they look lazy.”

Was I shocked to hear the shallow tactic she employs for selecting appropriate friends for her children? No, not really. Disappointed maybe, but not shocked. Why? Because there are plenty of parents who  spend an inordinate amount of time engineering what they perceive to be the ideal social mix for their offspring. Recently, I heard of a mother whose son has been strongly encouraged to divorce himself from his slightly younger pals because it’s time for him to ‘man up’ and make older friends. Ideally, those boys who have attained a level of maturity that belies their years – we’re talking primary school here.

The insidious process began with separating him in the playground ‘line up’ ahead of his school day. It reached a new and defining mark when the boy’s younger friends were excluded from his birthday bash. Several of the discarded number were reduced to tears. Hardly surprising, given that a bond formed at pre-school had now been torn up on a parental whim.

I’d prefer to think that the mum in question is naïve, ill-advised, or perhaps a little of both. However, all the signs are to the contrary, and the unpleasant shadow of the pushy parent seems to be in danger of morphing into something far more sinister than devising ways and means of keeping a child ahead of the game.
Posted by Poetry24 at 14:14 19 comments:

Dancing from a distance

There are three great stories in every family, if you just stay up talking long enough, it will all come out." - Stephen Poliakoff.

I had at least a half dozen potentially great stories, at the last count. Aside from those events I have witnessed at first hand, there are the tales and anecdotes that I pestered my maternal grandparents to repeat over and over. On the paternal side, the stories have colour and a hint of romance, yet they are born out of cold facts, recorded in official documentation. The stories are no less powerful, but they lack the levels of emotional investment that’s vital to understanding the connections between people and events. When someone is relating a family tale or offering an explanation as to why a certain event occurred, we are not just hearing the words, we are watching the expressions. We are getting something special, something that can rarely, if ever, be gleaned from passionless paperwork.

Today, I spent a little time organising some of Mags’ family photographs, most of which reside in a shoebox left by Mag’s late mother. Most of the faces are familiar or at least identifiable. But in almost all collections of family photos, there’s a minimum of one that got away. 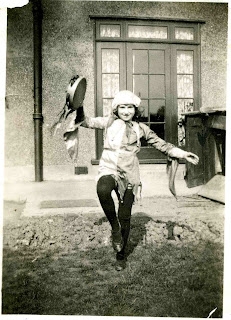 As soon as I set eyes on this unknown character, I was thinking ‘Poliakoff’. I’m reminded of the mysterious images in his television drama, “Perfect Strangers.” Suddenly I’m asking myself who the girl is posing for, and why. I’m wondering who she grew up to be, and what stories might have emerged if, at some point we had been afforded the opportunity to stay up and talk at length.
Posted by Poetry24 at 22:02 14 comments:

Hand in hand, with a clean pair of heels

Our identical twin granddaughters, affectionately known on this blog as Thing 1 and Thing 2, have kept us all on our toes from the word GO! 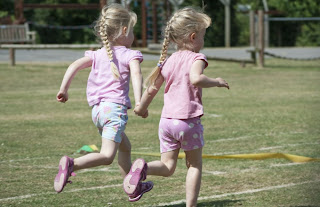 Yesterday, it was their turn. Their final time ever, at pre-school, was marked with a mini sports day. Those first tentative steps into the world of formal education have developed into strides of increasing confidence, as they head toward their reception year in September. Well done, girls!
Posted by Poetry24 at 06:57 14 comments:

Another story from the pen (and felt-tips) of SW. 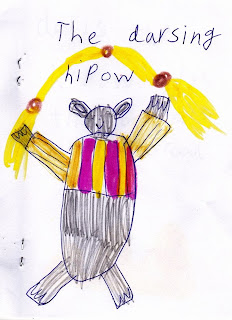 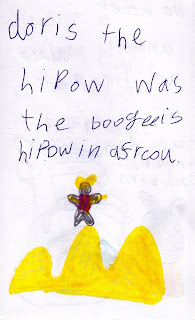 Boris the hippo was the boogiest hippo in Africa. 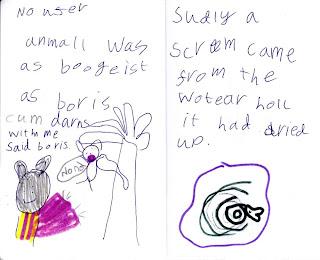 No other animal was as boogiest as Boris. "Come dance with me," said Boris (to the monkey). "No, no," came the reply.
Suddenly a scream came from the water hole. It had dried up. 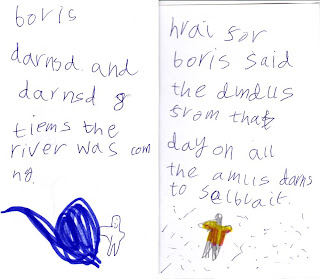 Boris danced and danced, 8 times. The river was coming. "Hooray for Boris," said the animals. From that day on, all the animals danced to celebrate. 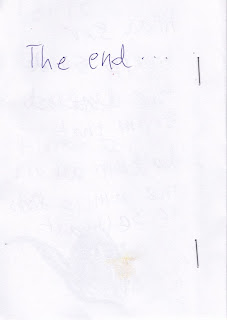 Interrogating databases, retrieving information in which you have no vested interest beyond the parameters of your job description can be dull, dull, dull. I should know.

But when those skills are combined with an innate and unquenchable curiosity, digging for detail can become a labour of love. Some of you will already know about my interest in family history. It’s an activity that can eat up time like few others. A new clue floats to the surface and you’ve turned up your collar, and left on the superhighway before anyone can whisper ‘Maltese Falcon’.

This week, I received an email from someone whose family, long ago, walked certain lineal lanes with mine. He had uncovered some maritime records that included the name of my three times great grandfather, Benjamin Hodges who died from yellow fever in the Dutch West Indies, in 1857.

The records date from the mid 1840s to the mid-1850s, and they detail the names of the ships he sailed on during that period. The SS Calcutta and the SS Atrato. What is so exciting is the fact that I now have a description of Benjamin. I already have a photograph of his son John (1848 – 1940), but until now I could only imagine what Benjamin might have looked like. The lad born in Henstridge, Somerset on 8th July, 1818, was 27 years old, 5ft 5 1/4 ins tall, had brown hair, grey eyes and a fair complexion. He had no distinguishing marks. But the thing I was most impressed with was the tick in the box that read, “Can Write.”

Wouldn’t it be something if he had written letters? Wouldn’t it be mind-blowing if some of them survived and rose to the surface unexpectedly, one day? Hmm, hardly likely, but good detectives never know when they’re beaten.
Posted by Poetry24 at 12:01 12 comments: