A place for everything


In a few days time, Square Sunshine will have been rising and setting for 6 years, despite the odd extended eclipse when a host of other distractions have forced their way between me and it.

I have a t-shirt that I bought some years back at the Cambridge Folk Festival. It bears one of those ambiguous logos, picturing a silhouetted figure, climbing a slope with a sinking sun before him. A quasi hippie line reads’ “What a long strange trip it's been.” The romantic in me identifies with the figure. The message could easily be referring to what is archived on these pages. 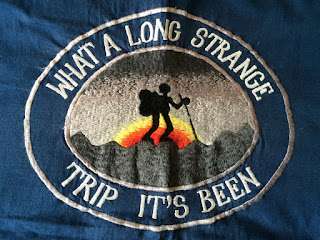 There have been many moments when I’ve thought I should be concentrating my efforts on writing solely about the grandchildren. It’s not as though I’ve been hard pushed for material. But instead, I’ve wandered around the landscape of my own grandparenthood for a large part of the time, trying my hand at this and that, and representing my thoughts and observations with photographs and tentatively executed poetry, the best of which might crop up again, but not here.

I doubt if it's uncommon among grandparents, to explore what the status means beyond the relationship we have with the new additions to the family. Maybe, sub-consciously, there’s a process of checking ones credentials. I think, for me at least, blogging has provided a place where memories, partially completed tick-lists of interests and threads of talent can be reviewed, stashed and ultimately pointed to as an extension of myself. Who knows, maybe the three girls will even get around to reading some of this stuff one day? In any event, for as long as the strange trip continues, I’ll be leaving occasional stories and souvenirs of grandparenthood here, although this will increasingly become their space, as originally intended. The other stuff will eventually have a blog of its own. Until then, it’s good to travel light.
Posted by Poetry24 at 13:07