Rapunzel was locked in a tower, high.
High enough to reach to the sky!

One day a prince came on his horse,
and what did he want? The maiden, of course.

He reached out to take Rapunzel, on his knees.
Then he cried out, "Come down, please!"

"Oh my prince, I really would.
I would if I knew I could.
But alas, my hair isn't long enough..." 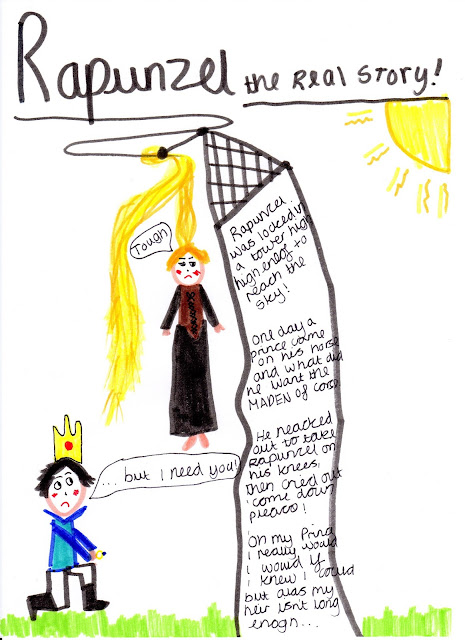 Yesterday we spent a few hours with our daughter and our grandchildren. We munched our way through some cookies, had some wonderful fresh ham baguettes for lunch, followed by chocolate sponge made by SW's own fair hands.

It was a fine day, so I mowed the grass and, afterwards, SW asked if I would play a board game she had made up. We played it few times. Each time I won, I grabbed my sun hat and declared it the 'Celebratory Hat". The levels of daftness quickly escalated, so I decided to trawl YouTube for some of my favourite comedy clips, just to demonstrate how high the silly bar has been set. The girls enjoyed this one in particular. At one point, Iris asked, "Why is he doing that?" I replied, "He's just being silly. And it's perfectly fine to be silly, especially when you're on your school holidays, and especially especially when you're only seven."

Grandad Can Be A Rock, & Role...Model