When I was about seven, I watched an episode of Robin Hood starring Richard Greene, which included a scene where the “baddie,” in black armour, lurked on a great staircase. I couldn’t sleep for nights. In my dreams/nightmares he was always after me. A pursuit that caused me to eventually wake, hot and breathless.

A few days ago, the eldest of our twin granddaughters (by ten minutes) told me she’d had a nightmare. For her, a giant Christmas tree began to move and wobble, generating monsters that began to chase her and her family. In fact the monsters in question were hideous hybrids of her favourite animals. Anyway, the family all crammed into the smallest of their two cars, and made their getaway. This, her sister told me, was the severely abridged version. “Ugh, she told us this at dinner, and it went on forever. We were all, like, *pulls the expression of someone in a catatonic trance* enough, already.” Sympathetic little soul. 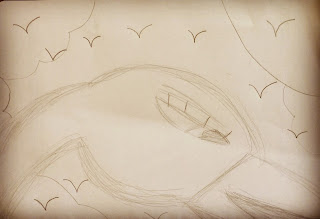 It was a different tale, today. Today number one twin presented me with a hand drawn picture of a swan, flying. I think it’s charming, but then I would, wouldn’t I? 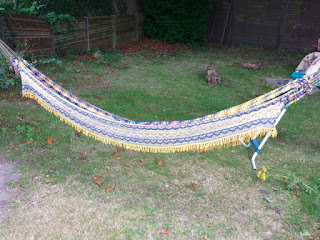 A place for imaginings.

She’s also been taking advantage of this hammock that her dad’s suspended beneath their horse chestnut tree. The perfect place for recording her imaginings.
Posted by Poetry24 at 18:36 12 comments:

Each summer, when I was a kid, my green-fingered gran would enter her blooms and various categories of produce into the local village shows. The fruits of her labours were judged and invariably won prizes. I suppose I must have been proud, but I was most likely distracted by the sights and sounds of village folk gathering to inspect the exhibits for themselves.

I have a pretty good memory for these kinds of events. Though it’s not photographic. Unless, of course, slightly out-of-focus, tilted-in-the-frame snaps count. 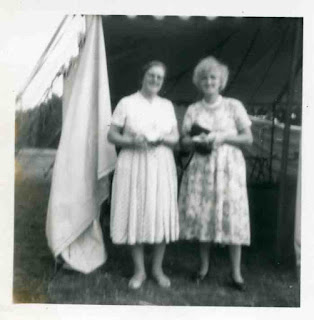 My gran (on the right) with her neighbour, Mrs Cooper, all dressed up for the Owlsbury Show.

A couple of things I recall, with great clarity. My great uncle Harry laying at full-stretch in the wooden box-cum-sidecar that my grandad used to carry his tools and goods in. On a trip to the Owlsbury show we followed grandad and Harry through the winding lanes, to the site where a considerable square yardage of off-white canvas had been carefully erected. Grandad, sat upright on his Triumph Thunderbird, and Harry reclining, his hands clasped behind his head, with the summer sun occasionally spotting through the leafy branches, lighting up his silver hair.

The second vivid image is that of my grandad stood talking to a man with a huge block of wood to one side of him. The surface of the wood was studded with nails. Some with their heads just above the surface, others bent double, and some brutally misshapen. I believe the idea was to drive home a six inch steel pin with three blows.

I begged grandad to have a go, and he did. The prize for successfully hammering the nail home, was sixpence. I’m guessing it was probably a penny for three blows. Anyway, the challenge was on. Grandad took a nail from the man and pushed the sharp end into the wood. Just enough to make it stand upright. Then he took the hammer and delivered an almighty blow. The block shook, the nail sunk to its middle into the wood, the man had lost his jovial smile. Another whack! This time there was only a small gap between the nail head and the wood. On the third strike, the nail was buried. The man dug deep into his trouser pocket and retrieved a sixpence. He handed it over to grandad and, in turn, grandad passed it to me.

I held on to that little coin tightly, for the rest of the afternoon, before it was tempted away from me in exchange for a bag of sweets.
Posted by Poetry24 at 18:12 8 comments:

Yesterday we enjoyed a family day out under sunbeams. We breathed deep, the heavy fragrances of ageing roses and lavender, served up on barely perceptible waves of crushed grass.

We picnicked under a plane tree, and watched children wearing their warmth lightly as they played. 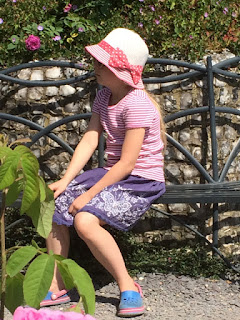 SW was looking forward to having a sleepover at her best friend’s house.

There was a little apprehension, that emotional tug we feel when facing time away from the family home, even if it is just one night. 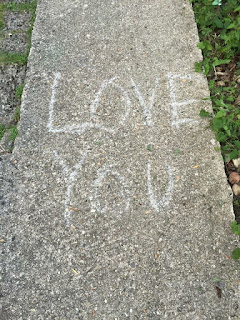 After she’d been picked up, our daughter went into the garden, to find that SW had left this message.
Posted by Poetry24 at 18:28 12 comments: